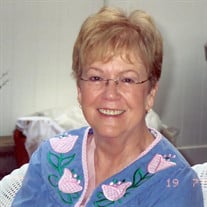 Jean Boggs, daughter of William and Lela Holtzclee Funkhouser, was born May 3, 1939, in Maunie, Illinois. She departed this life Thursday, July 1, 2021, in NorthRidge Place Assisted Living in Lebanon, Missouri, at the age of eighty-two years, one month, and twenty-eight days. On June 10, 1962, she was united in marriage to Ronald Lee Boggs, and to this union one daughter and two sons were born. She was preceded in death by her parents; and a brother, James Funkhouser. Jean is survived by her loving husband of fifty-nine years, Ronald, of the home; a daughter, Lisa Kinkade, and her husband, Lonnie, of Lebanon, Missouri; two sons, Clayton Boggs, and his wife, Lisa, and Douglas Boggs, all of Lebanon, Missouri; six grandchildren, Aaron, Ashlee, Kaytlen, Meagan, Luke and Austin; six great-grandchildren; a sister, Peggy Fox, of Marion, Ohio; several nieces and nephews; as well as a host of other relatives and friends. She was born and raised in Illinois and graduated from high school there. While in school she began working for General Telephone and she continued in that position for several years. After she and Ronald were married, they made their home in Ohio, and Jean continued her employment with General Telephone. In the 1970’s, they moved to Lebanon, Missouri, and made their home. Jean continued to be a devoted homemaker to her husband and family and also worked for K-Mart for twenty-five years. She later worked for Wehner’s Bakery for several years. Jean liked flowers and enjoyed working in her garden. She enjoyed traveling and did so as often as possible. She and Ron owned and operated a full service Skelly Service Station and then later she was the bookkeeper for the family business Boggs Auto Service, for over forty- years. She was always a hard worker and dedicated herself to whatever she was to do. Her family was very important to her and she especially enjoyed spending time with her grandchildren and great-grandchildren. Jean was a loving wife, mother, grandmother, great-grandmother, sister, aunt, and was a caring friend. We celebrate her life and know that her family and friends will cherish the wonderful memories she created for them during her lifetime.

Jean Boggs, daughter of William and Lela Holtzclee Funkhouser, was born May 3, 1939, in Maunie, Illinois. She departed this life Thursday, July 1, 2021, in NorthRidge Place Assisted Living in Lebanon, Missouri, at the age of eighty-two years,... View Obituary & Service Information

The family of Jean Boggs (Lebanon) created this Life Tributes page to make it easy to share your memories.