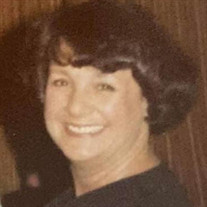 Jeannette Carol Kimes, 89, of Humansville, MO passed away Tuesday, June 14 in her home surrounded by love. Jeanette was born October 7, 1932 in Stockton, Missouri to Col. Tom B. and Doris O. Hambree. When she was three her family moved to Jefferson City, Missouri. She lived her childhood and teenage years as an Army “brat” living in several locations in the United States and Europe. Jeanette returned to the United States in 1951 to attend college at the University of Missouri in Columbia. It was there that she met and fell in love with Robert Taylor Kimes. On August 9, 1952 she became the most precious and loving wife to Bob. Soon after she began the most loved and cherished part of her life, as a mother to her children. She often said she always wanted three boys and three girls. She got her wish when Bobby, Marc, Pam, Jeff, Julie, and Amy came along. Jeanette was involved in her children’s lives and her community. She was a trailblazer for women. She was elected to City Council and was proud to be the first woman elected to the school board in Crane, Missouri in the late 1960’s and early 1970’s. Her community service continued into the 1980’s and beyond. During that time she was an educator for adults seeking their high school equivalency. Jeanette touched the lives of many students including the honor of teaching one elderly man to write his name for the first time. Through all of this she continued her college education. She continued teaching in special education for the Galena, Missouri school district for over a decade. Her greatest joy was having her house full of family and friends. She loved to cook and feed everyone. She always welcomed and cared for her children’s friends. While being a mom was her joy, becoming a Nana to her grandchildren may have topped it. She loved them all unconditionally and they love her beyond words! She especially enjoyed celebrating every holiday and special event with all of them. Jeanette loved to go fishing no matter the weather. She was a talented writer, artist and an avid reader. Jeanette is preceded in death by her parents and her precious son Marcus Hambree Kimes. She is survived by her husband Bob; her children, Bobby Kimes (Cathy), Vicki Kimes, Pamela Miller (Stuart), Jeff Kimes, Julia Nelson (Mark), and Amy Stewart. She is also survived by her brother Lt. Col. Jack E. Hambree (Carolyn); her grandchildren, Bobby and Sarah Kimes, Alisha Flanagan (Ryan), Deven Kimes (Katherine), Nicholas Kimes (Allison), Christopher Kimes (Suzan), Major Stuart Miller (Madison), Emily Kimes, Lyndsey Dunn (Craig), Bryan Nelson (Samantha), Jimmy Stewart, Weston Stewart (Stella); her great-grandchildren, Taylor and Joey Kimes, Kaitlin Rathbun, Arabella Flanagan, Grace Ann, Emma, and Maddy Kimes, Ainsley and Brenna Kimes, Wyatt and Lucy Miller, Josey and Lyla Dunn; as well as numerous nieces, nephews, and cousins. In lieu of flowers, memorial donations may be made to the American Cancer Society or the Hambree Cedar Gap Cemetery Association. Services for Jeanette will be held at 11:00 A.M. Wednesday, June 22 at the Butler Funeral Home in Humansville, Missouri. A visitation will be held Tuesday evening June 21, 2022 from 5:00 P.M. until 7:00 P.M. at the Butler Funeral Home in Humansville, Missouri. To send flowers or a memorial gift to the family of Jeanette Kimes please visit our Sympathy Store.

Jeannette Carol Kimes, 89, of Humansville, MO passed away Tuesday, June 14 in her home surrounded by love. Jeanette was born October 7, 1932 in Stockton, Missouri to Col. Tom B. and Doris O. Hambree. When she was three her family moved to Jefferson... View Obituary & Service Information

The family of Jeanette Kimes (Humansville) created this Life Tributes page to make it easy to share your memories.