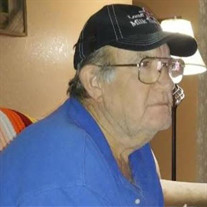 Jerold Rex McCown, son of Harvey C. Dorris and Ida Mae McCown, was born September 18, 1942, in Oklahoma City, Oklahoma. He departed this life Monday, January 17, 2022, in Lake Regional Hospital, in Osage Beach, Missouri, at the age of seventy-nine years, three months, and thirty days. On November 20, 2007, he was united in marriage to Twila Janiece Glines Miller and they shared several years of happiness and memories. He was preceded in death by his parents; and a brother. Jerold is survived by his wife, Twila, of the home in Lebanon, Missouri; a daughter, Tammy Armstrong, of White Deer, Texas; two sons, Jerold R. McCown, Jr., of Albuquerque, New Mexico, and Robert McCown, of White Deer, Texas; two step-sons, Matthew Allen and Mike Allen, both of Lebanon, Missouri; a number of grandchildren; a brother; as well as a host of other relatives and friends. He was raised in White Deer, Texas and then continued to live there and in the Amarillo, Texas area. He worked as a truck driver and in the Mann Factory which built military artillery. He and Twila made their home in the Lebanon area for the last several years. Jerold followed the Christian faith throughout his life. In his spare time he enjoyed talking on the HAM radio and liked being outdoors where his favorite activities were gardening and fishing. His family was very important to him and he especially enjoyed his grandchildren. Jerold was a loving husband, father, grandfather, brother, and was a caring friend. We celebrate his life and know that his family and friends will hold tight to the wonderful memories he made for them during his lifetime. All Services will be private and under the care and direction of the Holman-Howe Funeral Home of Lebanon, Missouri.

The family of Jerold R. McCown (Lebanon) created this Life Tributes page to make it easy to share your memories.