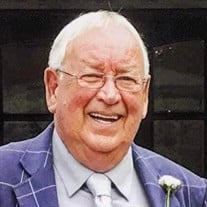 Jerry Rex ‘Poppie’ Baty, son of Rex and Jewell Moody Baty, was born July 18, 1944, in Mansfield, Missouri, and departed this life on April 27, 2021, at Mercy Hospital in Springfield, Missouri, at the age of seventy-six years, nine months, and nine days. He was united in marriage to Mary Lou Stanifer on April 18, 1969, and to this union two sons were born. He was preceded in death by his parents, and three sisters, Lucille Archer, Betty Calhoun, and Pearlee Willbanks. Jerry is survived by his wife of fifty-two years, Mary, of the home; two sons, Jeff Baty and wife Jay of Broken Arrow, Oklahoma, and Michael Baty and wife Leah of Springfield, Missouri; three grandchildren, Taylore Horton, and Jordan Baty, both of Broken Arrow, and Ethan Baty of Mansfield; two great-grandchildren, Grayson and Cameron Horton, and a third great-grandchild, Landon Warren, on the way; two sisters, Wanda VanEaton of Mansfield, and Diane Shaw of Bartlesville, Oklahoma; as well as many nieces, nephews, other relatives, and many, many friends. He was born in Mansfield and lived almost all his life here. He graduated from Mansfield High School in the Class of 1962. He was then drafted into the United States Army where he was stationed in Fairbanks, Alaska. After returning home, he started working at the Sugar Creek Creamery in Mansfield. In 1971, he began a 29-year career working for the Missouri Department of Transportation, retiring in 2000. Jerry was saved at an early age and attended the old First Baptist Church in Mansfield. He later became a member and deacon of the Mansfield Full Gospel Church and in 2007, he and Mary started attending the Harvest Projects Revival Center when Pastor Ronnie Baker returned to Mansfield and started that church. He really enjoyed serving the Lord and singing in the church. In his spare time, Jerry liked going to dirt track and drag races and mowing. He mowed the Mansfield Cemetery for several years and always took special care while doing so. But what he loved more than anything was his grandkids and great-grandkids. He was a very proud ‘Poppie’. Jerry was a loving husband, father, grandfather, great-grandfather, brother, uncle, and a man who truly cared for others. We will miss his smile, the friendly wave as he drove by, and the kind man we all knew. We celebrate his life and dedication to the Lord Jesus Christ and are comforted knowing he made lifelong preparations for this moment. Funeral services will be Friday, April 30, at 2 PM, in Harvest Projects Revival Center in Mansfield. Burial will be Monday, May 3, 2021, at 11 AM, in Missouri Veterans Cemetery in Springfield. In lieu of flowers, contributions may be made to the Gideon Bible Ministry.

The family of Jerry Baty (Mansfield) created this Life Tributes page to make it easy to share your memories.