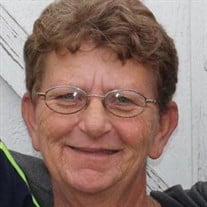 Jerry Leann Dry, daughter of Jimmie D. and Mardell Salsman, was born November 2, 1960, in Buffalo, Missouri. She departed this life Wednesday, February 9, 2022, in her home in Conway, Missouri, at the age of sixty-one years, three months, and seven days. On September 15, 1990, she was united in marriage to Larry L. Dry. She was preceded in death by her father; and a sister, Janice Gilpin. Jerry is survived by her loving husband of thirty-one years, Larry, of the home; a daughter, Cassandra Roush, of Nebraska City, Nebraska; two sons, Jeffery Wayne Dry, of Marshfield, Missouri; and William “Charlie” Dry, of Springfield, Missouri; four grandchildren; her mother, Mardell Salsman, of Conway, Missouri; her step-father, George Clark, of Bear Creek, Missouri; a sister, Joyce Huckaby, and her husband, Kelly, of Conway, Missouri; several nieces and nephews; as well as a host of other relatives and friends. She was born and raised in Buffalo, and graduated from Buffalo High School. She then made her home in Conway, where she worked at the Dairy Bar for twenty years. She began working for Tracker Marine for twenty-one years before her health began to fail. She was also a devoted homemaker to her husband and children. She enjoyed making craft projects and began volunteering at Conway Schools and shared her creations with the students. She had made stockings and other crafts for the entire school. She was very caring and generous. She loved sitting on her front porch. Jerry was a loving wife, mother, grandmother, daughter, sister, aunt, and was a caring friend. We celebrate her life and know that her family and friends will cherish the wonderful memories she created for them during her lifetime.

Jerry Leann Dry, daughter of Jimmie D. and Mardell Salsman, was born November 2, 1960, in Buffalo, Missouri. She departed this life Wednesday, February 9, 2022, in her home in Conway, Missouri, at the age of sixty-one years, three months, and... View Obituary & Service Information

The family of Jerry L. Dry (Lebanon) created this Life Tributes page to make it easy to share your memories.