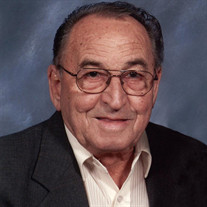 Jesse R. Reeves entered this life on February 3, 1934, in Lebanon, Missouri. He was one of 14 children born to Hosea and Serenia Kelsey Reeves and is their last child to enter eternity. Jesse happily spent his entire earthly life in Lebanon, Missouri. While attending a revival at Tabernacle Baptist Church he accepted Jesus, and then went onto to become a long time member of Community Baptist Church pastored by his son Allen. On January 20, 1951, Jesse married Bonnie L. Williams. They raised five sons and two daughters. In his early years, Jesse was employed by Bishops then Justice Furniture until 1970, Jesse and Bonnie started their own business, Lebanon Auto Upholstery. Together they built a successful and well-known business which is still operated by their son, Dennis. Jesse was known as a quiet man who enjoyed spending time with his family, especially at Sunday dinners. He looked forward to socializing with the members of his church family. Jesse enjoyed working outdoors, whether it was cutting wood, gardening, or working with his tractor. As he neared the time of his home going, he was determined to be independent for as long as possible. Jesse took his last earthly breath on Sunday, May 8, 2022, at his home as he wanted, with his two daughters present. Some of his last words were, “I asked God to forgive me of my sins and he did.” He would wish the same for all of his loved ones. Jesse is preceded in death by his parents; wife, Bonnie; sons, Scotty, Steve, and Ronald; great-grandson Joshua Reeves; brothers, Leonard, Claude, Lee, Franklin, Hershel, Louis, and Leslie; and sisters, Betty Gravens, Lola Saunders, Ethel Keen, Faye Sloan, Juanita Vibbard, and Jean McFadin. He is survived by sons, Dennis Reeves and wife, Teresa, and Rev. Allen Reeves and wife, Donna; and by daughters, Annette Danek and husband Scott, and Lana Boyer and husband David, all of Lebanon. Jesse was blessed with 13 grandchildren, 15 great-grandchildren, and 3 great-great-grandchildren. A memorial has been established to Community Baptist Church and contributions may be left at the funeral home.

Jesse R. Reeves entered this life on February 3, 1934, in Lebanon, Missouri. He was one of 14 children born to Hosea and Serenia Kelsey Reeves and is their last child to enter eternity. Jesse happily spent his entire earthly life in Lebanon,... View Obituary & Service Information

The family of Jesse Reeves (Lebanon) created this Life Tributes page to make it easy to share your memories.