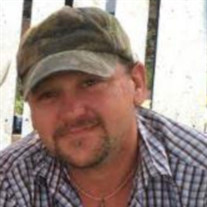 Jessie Walter Couch, son of Ward Thomas Potts and Brenda Gail Fisher Gausepohl, was born May 29, 1975, in Morris, Illinois. He departed this life Friday, May 21, 2021, from injuries received in an accident in Lebanon, Missouri at the age of forty-five years, eleven months, and twenty-three days. He was preceded in death by his father, Delbert Couch; his maternal grandparents, Gerald and Ida Fisher; his paternal grandparents, Leonard and Louzine Couch; and a sister, Tammy Blackburn. Jessie is survived by eleven children, Caleb Stone, of Ottawa, Illinois, Joey King, of Cole City, Illinois, Rachel Schall, of Channahon, Illinois, Elizabeth Knop, of Ottawa, Illinois, Zoey Couch, Ethan Harvey, Rylee, Johnnie Dunham, Anthony Lubbock, Mykah Frye, and Alyssa Brown, all of Lebanon, Missouri; five grandchildren, Piper, Kieran, Lilly, Lilah, and Rylee; his mother, Brenda Gausepohl, of Channahon, Illinois; his step-father, Ralph Gausepohl; his former wife, Melisa Bruton; his sweetness, Josie Dunham, of the home; his step-mother, Joyce Blackburn, of Lebanon, Missouri; three brothers, David J. Teal, ”Joey”, of Dickson, Tennessee, Jackie Blackburn and Jamie Blackburn, both of Lebanon, Missouri; two sisters, Angie Blackburn, and Tonya Blackburn, both of Lebanon, Missouri; an uncle, Ted Haynes, of Morris, Illinois; several nieces and nephews; a number of cousins; close friends, Lee Jansen, and Shawn Wilkey; as well as a host of other relatives and friends. He was born and raised in Morris, Illinois, where he graduated from high school, and then began working there. He eventually moved to Lebanon, Missouri, where he was employed by Independent Stave Company for several years, and then worked for Marine Electric and Tracker Marine Plastics for the last several years. Jessie was curious about faith, always wanted to do things for others, and liked to make people smile. In his spare time he enjoyed fishing on the river, hanging out with his friends and working. He loved music, and liked exploring and particularly cave exploration. His family was very important to him and he especially enjoyed his grandchildren. Jessie was a loving father, grandfather, son, brother, uncle, and was a caring friend. We celebrate his life and know that his family and friends will hold tight to the wonderful memories he made for them during his short lifetime. Funeral services for Jessie will be Saturday, June 5, 2021 at 2:00 P.M. at Holman-Howe Funeral Home of Lebanon. Visitation will be one hour prior to the service. A memorial has been established and contributions may be made through the funeral home.

Jessie Walter Couch, son of Ward Thomas Potts and Brenda Gail Fisher Gausepohl, was born May 29, 1975, in Morris, Illinois. He departed this life Friday, May 21, 2021, from injuries received in an accident in Lebanon, Missouri at the age of... View Obituary & Service Information

The family of Jessie W. Couch (Lebanon) created this Life Tributes page to make it easy to share your memories.