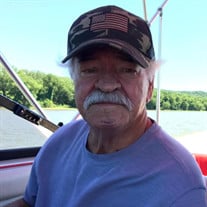 Jimmy Dale Gage, son of Virgil and Bertha Henson Gage, was born January 20, 1946, near Lebanon, Missouri. He departed this life Saturday, July 3, 2021, in St. Joseph Hospital, in Lake St. Louis, Missouri, at the age of seventy-five years, five months, and thirteen days. On June 19, 2003, he was united in marriage to Sharon L. Shackelford, and they shared the last eighteen years. He was preceded in death by his parents; two brothers, Paul and Don Gage; two sisters, Pauline Harrison and Ethel Archer; and his best friend, Ray Jones. Jimmy is survived by his loving wife, Sharon, of the home; a daughter, Denise Marie Dicapo, and her husband, Stephen, of Kansas City, Missouri; a son, Robert “Bob” D. Gage, and his wife, Alicia, of O’Fallon, Missouri; seven grandchildren, Molly, Ashley, Annabel, Nicholas, Brianna, Adalynn, and Colten; two great-grandchildren, Easton and Theo; several nieces and nephews; as well as a host of other relatives and friends. He was born and raised in the Lebanon area, and attended Lebanon R-III Schools. As a young man he entered the military and served his country faithfully in the United States Army during the Vietnam War. Once he was honorably discharged from the Army, he made his home in Independence, Missouri where he began a career as a truck driver. He continued in that position for over twenty-five years and then began working in management for a car hauling business. In 1992, he moved to St. Louis and made his home. While living there he met and married Sharon and they started their life together. Jimmy was a member of the Masonic Lodge and the Shrine Club. He was an excellent story teller, had a good sense of humor and was always willing to help others. He enjoyed fishing, playing the guitar and listening to music, particularly Bluegrass and Country. He was very talented at fixing anything that was broken and liked working on cars and boats. He liked animals and loved his dog “Daisy”. His family was very important to him and he especially enjoyed spending time with his grandchildren and great-grandchildren. Jimmy was a loving husband, father, grandfather, great-grandfather, uncle, and was a caring friend. We celebrate his life and know that his family will hold tight to the wonderful memories he made for them during his lifetime. “Hey Dad, You busy?”

The family of Jimmy D. Gage (Lebanon) created this Life Tributes page to make it easy to share your memories.