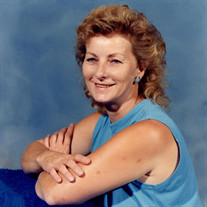 JoAnn Rozin, daughter of Kenneth and Margaret Brown Gibbs, was born January 4, 1951, in Lebanon, Missouri. She departed this life Saturday, July 10, 2021, in her home, near Lebanon, Missouri, at the age of seventy years, six months, and six days. On September 28, 1996, she was united in marriage to Keith Duane Rozin, and they shared the last twenty-four years. She was preceded in death by her parents; and four brothers, Gene, Dale, Howard and Bobby Gibbs. JoAnn is survived by her loving husband, Keith, of the home; two daughters, Angelia Sue Luna-Garcia, and Anna Renay Odle; a son, Gary Alen Odle; her grandchildren, Ashley Mangas, Briann Matheis, Wade Romesberg, Erika Odle, and Patrick Odle; her great-grandchildren, Abygail, Brooklyn, Calvin, Blake, and Tyler James “TJ”; two brothers, Bill Gibbs, and Donnie Gibbs; two sisters, Judy Williams, and Sue Sutton; several nieces and nephews; as well as a host of other relatives and friends. Special thanks to Christie Taylor who was her caregiver and friend. She lived her entire life in the Lebanon area and graduated from Lebanon High School in the Class of 1969. In addition to being a devoted homemaker to her family, she also worked at Independent Stave Company, H. D. Lee Company in Richland, and since 1999, had operated a kennel. She loved raising dogs and operating her kennel. She also liked collecting clocks and going to yard sales. She enjoyed being outdoors where her favorite activities were camping, fishing, and growing flowers. Her family was very important to her and she especially enjoyed having time with her grandchildren and great-grandchildren. JoAnn was a loving wife, mother, grandmother, great-grandmother, sister, aunt, and was a caring friend. We celebrate her life and know that her family and friends will cherish the wonderful memories she created for them during her liftetime. Funeral services for Joann Rozin will be Thursday, July 15 at 6 p.m. in the Holman-Howe Funeral Home of Lebanon. Visitation will follow. A memorial to Dotson Cemtery has been established and may be left at the funeral home.

JoAnn Rozin, daughter of Kenneth and Margaret Brown Gibbs, was born January 4, 1951, in Lebanon, Missouri. She departed this life Saturday, July 10, 2021, in her home, near Lebanon, Missouri, at the age of seventy years, six months, and six... View Obituary & Service Information

The family of JoAnn Rozin (Lebanon) created this Life Tributes page to make it easy to share your memories.

JoAnn Rozin, daughter of Kenneth and Margaret Brown Gibbs, was...