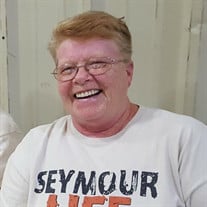 Beloved wife, mother, grandmother, great-grandmother, sister, aunt and friend, JoAnn Wormington departed this earthly life for Heaven the morning of August 23, 2021, as she was surrounded by the great love and comfort of her family. JoAnn was blessed with her wish of being at home with family and friends in the last days of her life’s journey; those glorious five days will forever be cherished and bring comfort to their hearts. Gone before JoAnn were her parents; sister Janet Sanders, brother Perry Street, and stepsister Kathy Webb; also, sister-in-law Clara Burley, and brothers-in-law, Jack Wormington and Glen Wormington. Her stepfather Lloyd G. ‘Bo’ Dickson also preceded her in death. One of six children, JoAnn Street was born May 25, 1955, in Leavenworth, Kansas, to James and Bessie Irene (Manar) Street. With her father being active in the United States Army, the Streets moved around to different military bases until finally settling near family in Seymour, Missouri; JoAnn was in third grade at the time and continued to attend Seymour schools. On March 7, 1976, JoAnn married the love of her life, Ralph Edward Wormington, and to this union a daughter and son were born. JoAnn was a dedicated wife and a loving mother and homemaker. She also worked very hard outside the home, working at H.D. Lee until it closed and then Hutchens Industries for a time. For years, she was the friendly cashier at Diggins Quick Stop. In more recent years, JoAnn was providing private in-home healthcare for family. JoAnn was a devout member and attendee of Seymour Life Church. She loved manning the nursery on Sundays and volunteered wherever needed. She was the dedicated coffee maker at church and members said she made the best coffee of them all. JoAnn was also very creative and crafty. She loved making jewelry – every girl in the family had a piece of some kind. In other spare time she also enjoyed making flower arrangements. The greatest joys in JoAnn’s life were her family and grandchildren. She was BIG into being a GRANDMA!! She was a fun-loving grandma and made each grandchild feel special – and she gave the best hugs ever. Faith, family, friends and fur-baby Sadie were at the heart of JoAnn’s world. She, along with her devoted husband Ralph, lived her life setting an example of love, caring, sharing, and good humor that will be so fondly remembered. JoAnn leaves behind her love of 45 years, husband Ralph of Diggins; daughter Carolee Ann and husband Robert L. Meek III of Battlefield, Missouri, and son Christopher Wormington and wife Sarah of Seymour; six adored grandchildren, Courtney Humbard, Andrew Meek, Addisun Meek, Zackory Wormington and fiancé Nikki Lamkey, Christen Butts and husband Ethan, and Ethan Wormington. JoAnn was great-grandma to Sylus Mosher. Three brothers survive, Ronald Street and wife Pamela of Joplin, Missouri, Jimmy Street and wife Delphine of Valdosta, Georgia, and Gerald Street and wife Phung of Diggins; two stepbrothers, Ronald Dickson and wife Pamela, Richard Dickson and wife Sandy, and stepsister Virginia Truitt and husband Tony; four sisters-in-law, Elizabeth Street of Mansfield, Missouri, Carol Norris of Independence, Missouri, Nancy Rancator and husband Greg of La Porte, Indiana, and Dawn Wormington of Joplin; also, brother-in-law Gene Wormington. She was a caring aunt to lots of nieces and nephews; and a dear friend and neighbor to countless others. In lieu of flowers, memorials in JoAnn's name may be made to the following, and can be mailed, or left at the funeral home or Seymour Life Church: Southern Missouri Women's Ministry 528 W. Battlefield St. Springfield MO 65807

Beloved wife, mother, grandmother, great-grandmother, sister, aunt and friend, JoAnn Wormington departed this earthly life for Heaven the morning of August 23, 2021, as she was surrounded by the great love and comfort of her family. JoAnn was... View Obituary & Service Information

The family of JoAnn Wormington (Seymour) created this Life Tributes page to make it easy to share your memories.