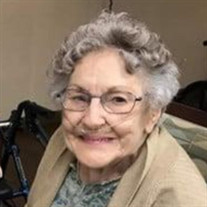 Not sure what to send?

Joanne Elizabeth McClelland, age 92, of Hermitage, MO, passed away on Monday, May 16, 2022. Joanne was the only child of Harold and Leona McIntire born in Norman, Oklahoma on July 25th, 1929. When she was a young girl, about 6, she moved with her parents to North Kansas City, Missouri where she attended school through graduation. She enjoyed watching movies in the theater located right around the corner from her house. After graduation, Joanne attended Stephen’s College in Columbia, Missouri for a year before she married her sweetheart, George Miles McClelland, Sr on January 1, 1949 upon his return from the service. They celebrated 36 years of marriage before his passing in 1984. After George returned from the war, he became a union electrician and the couple moved to the south of the city to live in the Ruskin Heights neighborhood. The couple were blessed with two sons, George Jr. and Robert. It was during these years that Joanne worked as an election judge and sold Watkins products. George and Joanne loved to fish and camp so they often visited Pomme De Terre and in 1974, they were able to move to Galmey, Missouri where George secured work as an electrician during the construction of Truman Lake Dam. Joanne went to work for West Central Community Action Agency as a home aide, serving residents of Hickory County. She was with the agency for 18 ½ years before retiring at the age of 75. Joanne tried every day to do anything good in her community and to provide services to others less fortunate. She spend most of her time volunteering for programs, services and residents of Hickory County. She volunteered at the McCarty Senior Center, the CARES Food Pantry (she was a founding member), Relay for Life and the local AL Anon group. She also spent many hours volunteering time to Pomme De Terre Methodist Church, where she remains a member. Joanne was a devoted Mother and Grandmother as well as a valued member of her community. There was never a holiday, birthday, or other milestone where there wasn’t a card sent and a phone call received. Her goal was to ensure that everyone she had contact with felt special in their achievements. No one was ever truly alone with Joanne in their lives. Joanne was preceded in death by her parents as well as her husband George McClelland. Also proceeding her was a very special friend, Jim Buckner. Surviving include her children: Robert (Diane) McClelland, St. Joseph, MO and George Jr (Jane) of Springfield, MO. Grandchildren: Elizabeth Parks (Dennis), Halfway, MO; Kimberly (Zac) Thomas, St. Joseph, MO; Lyman (Lundan) Johnson, St. Joseph, MO; Mike (Michelle) McClelland, Dover, TN; Richard (Dori) McClelland, Jefferson City, MO; Marc McClelland, Ottawa, KS; Jeanette Hodgson, Springfield, MO and William McClelland, Springfield, MO. Also surviving are her Great Grandchildren: Klarissa, Kaleb, Elena, Arya, Raya, Marek, Taya, Indi, Breanna, Carolyn, and Grant. Services for Joanne will be 11:00 AM Monday July 25, 2022 at the Pomme De Terre United Methodist Church. Visitation will be held 10:30 - 11:00 AM at the church. To send flowers or a memorial gift to the family of Joanne Elizabeth McClelland please visit our Sympathy Store.

Joanne Elizabeth McClelland, age 92, of Hermitage, MO, passed away on Monday, May 16, 2022. Joanne was the only child of Harold and Leona McIntire born in Norman, Oklahoma on July 25th, 1929. When she was a young girl, about 6, she moved with... View Obituary & Service Information

The family of Joanne E. McClelland (Bolivar) created this Life Tributes page to make it easy to share your memories.