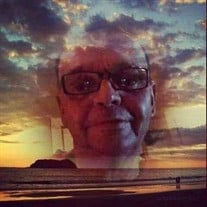 Joe Lyle Myers, son of Bill and Delores Belt Myers, was born December 31, 1958, in Hutchinson, Kansas. He departed this life Monday, April 25, 2022, in his home, in Lebanon, Missouri, at the age of sixty-three years, three months, and twenty-four days. On December 27, 2010, he was united in marriage to Pamela Martz, and they shared lots of happiness and memories the last ten years. He was preceded in death by his parents; his grandparents; a brother, Lloyd Myers; and a sister, Linda Cauldwell. Joe is survived by his loving wife, Pamela, of the home; a son, Joey Myers, of Lebanon, Missouri; two step-sons, Jimmie Schimmels, of Festus, Missouri, and Justin Schimmels, of the State of Ohio; fourteen grandchildren; a sister, Diana Smith, of Shidler, Oklahoma; an aunt, Barbara Shenek, of Eureka, Kansas; as well as a host of other relatives and friends. He was raised mainly in Oklahoma and then moved to Kansas after his father passed away. He continued to make his home in Kansas for many years, where he worked as a machinist for various factories. He was known for not waiting for repairmen to come fix his machine when it would break down. Instead, he would fix it himself. In 2018, he and Pamela moved to Missouri to be near his family. For the last several years, he and Pamela made their home in Lebanon. Joe followed the Baptist faith throughout his life. He liked watching wrestling, football and basketball on television. His family was dear to him and he especially enjoyed having time with his grandchildren. Joe was a loving husband, father, grandfather, brother, and was a caring friend. We celebrate his life and know that he will be fondly remembered and greatly missed by all those who knew and loved him. No services are planned at this time.

Joe Lyle Myers, son of Bill and Delores Belt Myers, was born December 31, 1958, in Hutchinson, Kansas. He departed this life Monday, April 25, 2022, in his home, in Lebanon, Missouri, at the age of sixty-three years, three months, and... View Obituary & Service Information

The family of Joe Lyle Myers (Lebanon) created this Life Tributes page to make it easy to share your memories.