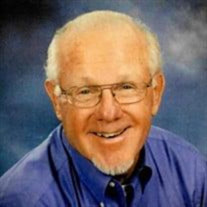 John Gerald Falcone, 82, peacefully entered the presence of his Savior Jesus Christ on December 19, 2021 at his daughter’s home in Joplin, Missouri, with Gloria, his beloved wife of 60 years, at his side. John was born in Chicago, Illinois on December 21, 1938, the son of Madeleine and Nicholas Falcone. John grew up with two younger brothers in the Chicago suburb of Melrose Park. As a youth, he honed a strong work ethic with an intense spirit of adventure, resourcefulness, and mechanical curiosity. As a young adult, John placed his faith in the life, death, and resurrection of Jesus Christ for salvation and eternal life, a decision that shaped the remainder of his life and impacted generations of family, friends, and neighbors. While attending college at Spring Arbor College in Michigan, John met and fell in love with Gloria Perry, and they married in April 1961. Shortly after, John served a 3-year stint in the U.S. Army beginning in 1963, including a deployment in post-war Korea. While in the Army, John developed an eye and passion for photography. After his service, they settled in Wheaton, Illinois, where three daughters were born. John leveraged his burgeoning photography skills as a professional for Allstate Insurance and for weddings. Then, in 1974, after John became more serious about obeying God’s leading in his life, they took a giant leap of faith to follow God’s call to move their family to a small farm deep in the woods near Ellington, Missouri. Although their life on the farm did not unfold as planned, John applied his exemplary work ethic, mechanical skills, and penchant for careful list-making to learning how to manage life in the hardscrabble woods of Missouri. John became proficient in adapting and using tools, machines and the land itself in order to make the most of their farm. He also started a new lumber mill business with Marvin Richards, his close friend and business partner. Two more daughters were born while they lived in Ellington. In 1987, John and Gloria moved with their daughters to Bolivar, Missouri, where John began a local real estate business. He and Marvin split the mill business, with John launching a lumber brokerage called Ridgeland Forest Products. For the next 34 years, John invested personally and professionally in the Bolivar and Polk County community. He developed two residential neighborhoods in Bolivar as well as several lots into subdivided properties near Pomme de Terre Lake. John was also an avid fisherman on local waterways. He enjoyed restoring early 90’s Miatas, working with power tools and machinery in his shop, and solving all sorts of mechanical challenges. He delighted in entertaining his grandkids at his home with tractor rides, his homemade go-cart track, bonfires, target shooting, games, and various building projects in his shop. His humor, gift for rhyme, and hearty laugh infected and enlivened every family gathering. As the leader of a home full of girls, John lovingly prayed for and counseled his daughters through years of relationships. With each marriage, John welcomed every son-in-law as his own son, with love, respect, and a willingness to give wise counsel to them at any time. He was a faithful member at First Baptist Church of Bolivar, where his faith grew through serving the community and studying God’s word in fellowship with many precious friends. He was a trusted source of practical counsel and biblical wisdom, serving on various committees that leveraged his organizational, construction, and mechanical skills. He also helped lead the annual FBC Lovin’ Thy Neighbor garage sale since its inception which benefited the needy across Polk County. John’s legacy of faith and love of life is reflected in the uncommonly long list of surviving family members whom he dearly loved and prayed for every day. John is survived by his wife of 60 years, Gloria (née Perry) Falcone. He also survived by five daughters: Kristina (Scott) Fox of Franklin, TN; Cheri (Tyrone) Adcock of Joplin, MO; Michelle (Leon) Wirth of West Chicago, IL; Elizabeth (Miles) Walz of Lawton, OK; and Angela (Joseph) Funderburk of Avon, CT. He is further survived by 26 grandchildren: Racheal (Chad) Moore, Jonathan (Kristin) Pressnell, Aaron Pressnell, Abigail Pressnell, Micah Pressnell, Caleb (Rachel) Adcock, Sarah Adcock, Jacob Adcock, Gabriel (Sage) Adcock, Anna (Cole) McAlester, Mary Adcock, Noah Adcock, Hannah (Joshua) Herup, Rebecca Wirth, Emma Wirth, Olivia Wirth, Leah Wirth, Clara Wirth, Alicia Wirth, Jenna Wirth, Madeleine Walz, Miles Walz, Grace Walz, Laura Jo Funderburk, Max Funderburk, and Jackie Funderburk. He is also survived by 12 great-grandchildren: Isaac, Alanah, Lucas, and Aubrey Moore; “Baby Girl” Pressnell due in January 2022; Joscelyn and Isabelle Adcock; Owen Adcock; Eleanor Adcock; Jasper McAlester; Esther and Ezra Herup. John is also survived by his brother David (Joan) Falcone of Bolivar, MO and sister-in-law Janice Brandon-Falcone of Maryville, MO. John was preceded in death by his father, Nicholas Falcone; mother and step-father Madeleine (Falcone) May and Charles May; and brother Paul Falcone. A service for John will be held on Thursday, December 23, 2021 at 11:00 A.M. at the First Baptist Church in Bolivar. Visitation will be held one hour prior, starting at 10:00 A.M. Burial with military honors will commence later in the day at the Missouri Veteran's Cemetery in Springfield, Missouri at 2:00 P.M. In lieu of flowers the family has requested that memorial donations be made to Samaritan's Purse (samaritanspurse.org), PO Box 3000, Boone, NC 28607. . To send flowers or a memorial gift to the family of John G. Falcone please visit our Sympathy Store.

John Gerald Falcone, 82, peacefully entered the presence of his Savior Jesus Christ on December 19, 2021 at his daughter&#8217;s home in Joplin, Missouri, with Gloria, his beloved wife of 60 years, at his side. John was born in Chicago, Illinois... View Obituary & Service Information

The family of John G. Falcone (Bolivar) created this Life Tributes page to make it easy to share your memories.

John Gerald Falcone, 82, peacefully entered the presence of his...