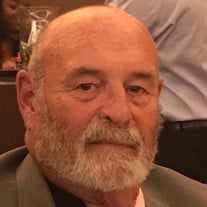 John Charles Cappel, Sr. of Lebanon, Missouri, passed away in his home Sunday morning, February 6, 2022. He was born July 27, 1950 in Springfield, Illinois to Joseph William Cappel, Sr. and Addie Elizabeth Ashworth. He was raised in Kewanee, Illinois and attended school there until he was 12 years old. The family then moved to Florida and he finished school there, graduating from Leto Comprehensive High School in Tampa, Florida. On April 11, 1970, he married Mary J. Miller and to this union three children were born, two sons and a daughter. They remained in Florida until 1980 before moving to Atlanta, Georgia where John worked as an electrician. In 1986 the family returned to Florida before moving to Sikeston, Missouri in 1989. John was a Journeyman Electrician and member of the Electricians Union, Local #702 IBEW. He was Substation Journeyman Electrician at the Sikeston Board of Municipal Utilities. He was very knowledgeable as an electrician and those in the business frequently called on John for advice and answers to their questions. John was preceded in death by his parents; his brother, Joseph W. Cappel, Jr.; and his 50 year-old son, John, Jr., who just passed away January 28, 2022. He is survived by his loving wife, Mary, of the home; a son, William Cappel and his wife, Dymisha of Marshfield, Missouri; a daughter, Elizabeth Cappel Schmutzler and her husband, Quentin of Linn Creek, Missouri; five grandchildren, Austin Cappel and his wife, Lethie of Marshfield, Kristen Schmutzler, Carter Schmutzler of St. Louis, Missouri and Zachary Cappel and Taylor Cappel; three great-grandchildren, Atley Cappel, Sawyer William Lee Cappel and Ellie Mae Cappel, all of Marshfield, Missouri; two nieces, Connie Perry of Florida and Chris Brown of Florida. John had many hobbies, including fishing and hunting, but his woodworking and furniture building will be what his family will most likely remember most. He built many beautiful pieces of furniture for his family, including their dining room table. He also built dressers, headboards, end tables, whatever was needed. These will definitely be family heirlooms for decades to come. The family enjoyed being together whenever possible and John enjoyed his grandchildren living so close to him. He was a good example for his family and leaves not only a strong legacy for them to follow, but many great and wonderful memories. Joint funeral services for John, Sr. and John, Jr. will be held Saturday, February 19, 2022 at 2 p.m. at Holman-Howe Funeral Home in Lebanon, Missouri. A visitation will be held one hour prior to the service. Burial will follow in Mount Rose Memorial Park in Lebanon.

John Charles Cappel, Sr. of Lebanon, Missouri, passed away in his home Sunday morning, February 6, 2022. He was born July 27, 1950 in Springfield, Illinois to Joseph William Cappel, Sr. and Addie Elizabeth Ashworth. He was raised in Kewanee,... View Obituary & Service Information

The family of John Cappel, Sr. (Lebanon) created this Life Tributes page to make it easy to share your memories.

John Charles Cappel, Sr. of Lebanon, Missouri, passed away in...

Send flowers to the (Lebanon) family.