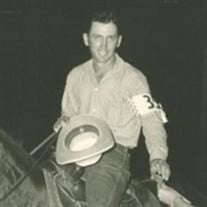 John Columbus Nimmo, Jr. was born to J.C. and Leona (Bennett) Nimmo on September 1, 1927 in Denoa, Oklahoma, also known as Whizbang, Oklahoma; a prosperous oil town. He passed from this life on Wednesday, January 5, 2022. A few years after John’s birth and between the Depression, the drought years, and the illness of his mother, the family moved back home to Charity, Missouri. Then, when he was seven years old his mother died. His school years were spent at the Boyd one-room schoolhouse and the Charity High School. Many people called him “Cowboy,” a nickname given to him as a boy by his father. This was because he broke horses for the neighbors. From 1946-1948 he was in the United States Army, and part of that time was spent in Occupied Japan. He was awarded medals of honor and served in the reserves from 1954-1957. Growing up through hard times and World War 2 made him serious about taking care of your family, your things, and your country in a way that later generations may not appreciate enough. In 1950 he married Helen Evens in Pratt, Kansas. Later moving to Red Top when Karen and Colleen were little and to the Prairie Grove Community in 1970 where he lived for the rest of his life. In 1984 he married Sonja Sampson, who also had two daughters, Teresa and Janet. They shared many happy years together. Jr. was a hard-working and ambitious man who always tried to make what he had into something better than it was when he got it. By doing this many times over for many years he became known as a good farmer, horseman, neighbor, friend, and businessman. He was an outdoors person, happy to be self-employed working on the farm with dairy and beef cattle and horses, as well as buying and selling livestock and property. He never completely retired and didn’t want to, he loved to work. Jr. was preceded in death by his parents; three sisters, Marjorie Powell, Phyllis Sharp, Helen Armstrong; one brother, Doyle Nimmo; and a cousin, Lee Nimmo, who lived with the family after his parent’s deaths. He is survived by his wife, Sonja Nimmo; sister, Polly Lillegard; brothers, Chuck and Bill Nimmo; daughters and sons-in-law, Karen & Ronnie Condren and Colleen & Al Nyberg; stepdaughters and their husbands, Teresa & Chett Block and Janet & Luis Fernandez; five grandchildren; five step-grandchildren; 12 great-grandchildren; and two great-great-grandchildren. Funeral services will be held at 1:00 p.m. on Tuesday, January 11, 2022 at the Cantlon-Otterness & Viets Funeral Home in Buffalo, Missouri with Pastor Tim Case and Bro. Dennis Skinner officiating. Escorts will be Taylor Block, Grant Block, Nathan Nyberg, Zach Condren, John Nyberg, Troy Nimmo, Larry Powell, Randy Powell, and Brad Hawkins. Honorary Escorts will be Bill Nimmo, Chuck Nimmo, Jess Stafford, Bob Franklin, Ray Sergeant, Roy Hurd, and Chuck Johnson. Visitation will be Monday, January 10, 2022 from 7:00–9:00 p.m. at the funeral home. Interment will be in the Maple Lawn Cemetery under the care and direction of the Cantlon-Otterness & Viets Funeral Home of Buffalo. In lieu of flowers memorial contributions can be made to the Macedonia Cemetery and/or the McGee Chapel Cemetery. To send flowers or a memorial gift to the family of John Columbus Nimmo Jr. please visit our Sympathy Store.

John Columbus Nimmo, Jr. was born to J.C. and Leona (Bennett) Nimmo on September 1, 1927 in Denoa, Oklahoma, also known as Whizbang, Oklahoma; a prosperous oil town. He passed from this life on Wednesday, January 5, 2022. A few years after... View Obituary & Service Information

The family of John "Cowboy" Nimmo, Jr. (Buffalo) created this Life Tributes page to make it easy to share your memories.