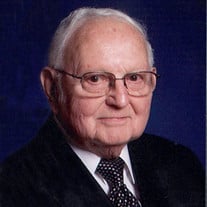 John Warren Reese, son of John Morgan and Ethel Dean Reese, was born April 19, 1921, in Marshall, Missouri. He departed this life Monday, September 20, 2021, in Lebanon, Missouri, at the age of one hundred years, five months, and one day. On May 6, 1944, he was united in marriage to Bonnie Lee Roper, and to this union four daughters were born. He was preceded in death by his parents; his wife, Bonnie, on October 28, 2018; a brother, Tom Reese; and two sisters, Betty Rains, and Helen Brock. John is survived by his four daughters, Susan Reese Sellers, of Lebanon, Missouri, twins, Elizabeth Reese, of Irving, Texas and Katherine Terry, and her husband, Sam, of Hot Springs Village, Arkansas, and Cindy Walters, and her husband, Mike, of Lebanon, Missouri; two grandsons, Scott Walters, and his wife, Stefanie, of Baltimore, Maryland, and Chris Walters, and his wife, Nicole, of Lebanon, Missouri; five great-grandchildren, Anslee, Hattie, Kendall, Aiden, and Benjamin; a number of nieces and nephews; as well as a host of other relatives and friends. He was born in Marshall, Missouri, and was raised in Lebanon, Missouri, where he graduated from Lebanon High School in the Class of 1939. He then served in the United States Army Air Corps during World War II. After being honorably discharged from the Army, he entered St. Louis College of Pharmacy on the G.I. Bill. After he and Bonnie were married, they made their home in Lebanon and lovingly raised their daughters. He and Bonnie established Reese Pharmacy in downtown Lebanon in 1957, and John was the owner pharmacist until they sold the store in 1986. He then worked at the Fort Leonard Wood Pharmacy for several years, before going to work for Mercy Pharmacy where he stayed until officially retiring at the age of 92. John had made his profession of faith in Christ and was a longtime active member of First Christian Church (Disciples of Christ). He had served on various committees and was also a Deacon. He was a longtime member of the Lebanon Rotary Club and was a Paul Harris Fellow Plus recipient. He had served on the Lebanon R-III School Board, and was a Lebanon Wall of Honor recipient. He was passionate about his work and dedicated himself to it for sixty-three years. He enjoyed following his grandchildren’s sporting activities and loved his family dearly. John was a loving father, grandfather, great-grandfather, uncle, and was a kind and caring friend. We celebrate his life and all of his accomplishments and know that his family and friends will treasure all the wonderful memories he made for them during his long life. Donations to First Christian Church may be made through the funeral home.

The family of John Warren Reese (Lebanon) created this Life Tributes page to make it easy to share your memories.