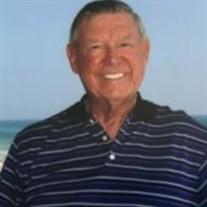 John Wright went to be with his Lord on September 21, 2021. He was born on April 8, 1932 in Verdun, Quebec to his loving parents, Harry and Gladys Wright. They were wonderful Christian role models during their entire life and he always felt so fortunate to have such wonderful parents. He always loved sports and played hockey, football, and baseball from a young age until he was in his thirties. In 1948 He graduated from Verdun High School and in 1952 he graduated from McGill University with a Bachelor of Science degree in Honours Chemistry. In his junior and senior year, he played hockey for the McGill University Varsity Team. In 1952 he was hired by Nortel Networks as a member of a multidiscipline team to manufacture the first semiconductor transistors in Canada. He worked on semiconductors-transistors to integrated circuits for his thirty-eight-year career with Nortel, starting in Montreal, and later working in facilities dedicated to custom semiconductors in Ottawa, Canada and Rancho Bernardo, California, where he retired in 1991. In 1957 he met the love of his life, Sheila Chesser and in 1958 they were married. Soon after three children arrived, Stephan, Gregory, and Caroline. They were further blessed with three lovely granddaughters, Jerica, Ciara, and Rachel. From 1965 to 1980, John worked in Nortel’s semiconductor facility in Ottawa, Canada as a Senior Staff Engineer. In 1980 John and the family moved to San Diego, California where he was a member of a start-up team bringing a new semiconductor facility on-line for the Nortel Company. There he progressed from Engineering manager to Director of Engineering to Director of Operations. He retired in 1991 and he and Sheila enjoyed traveling to many areas of the country including one of their favorite places, the island of Maui in Hawaii. In later years they enjoyed cruising. A most memorable cruise was on their 50th Anniversary where the entire family celebrated and had a wonderful time. John had two brothers, Norman (predeceased) and Keith. He is survived by his wife and best friend, Sheila; sons Steve (Mari), Gregory (Leslie), Daughter Carrie Scott; and his three granddaughters, Jerica, Ciara, and Rachel. John believed God truly blessed him with a wonderful life, a loving beautiful wife and family, and so many great memories. He felt it was important to have an attitude of gratitude. Memorial services for John will be held Friday, Sept. 24 in Allee-Holman-Howe Funeral Home at 10:00 a.m. To send flowers to the family or plant a tree in memory of John Gordon Wright please visit our Tribute Store.

John Wright went to be with his Lord on September 21, 2021. He was born on April 8, 1932 in Verdun, Quebec to his loving parents, Harry and Gladys Wright. They were wonderful Christian role models during their entire life and he always felt... View Obituary & Service Information

The family of John G. Wright (Camdenton) created this Life Tributes page to make it easy to share your memories.