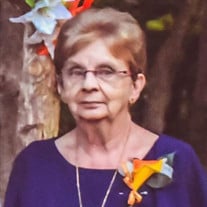 Judy Lawson, beloved mother, grandmother and great-grandmother, unexpectedly departed this life the afternoon of May 13, 2021, at Mercy Hospital in Springfield, Missouri. She was seventy-five years of age. One of five children, she was born Judy Kay Dix, on January 5, 1946, to Charles and Edna (Turner) Dix. She was raised in Seymour, Missouri, and attended Seymour schools. After high school she worked at H.D. Lee in Seymour, and later, Positronic in Springfield. Judy shared stories about ‘the Fordland boys’ who would cruise the Seymour square. She met and fell in love with one of those boys – Larry Doris Lawson. They married, moved to Fordland in the mid-1970s, and raised four children. Judy was self-described as ‘nosy’, and lived her life with an unashamed tendency to find out what was going on in any given situation. She enjoyed life, never taking herself too seriously and was known by many to be ornery; this made her a very popular babysitter for family and neighborhood kids. Judy also enjoyed finding new treasures at garage sales, especially furniture, and many other items for which she had no practical use; her home furnishing arrangements changed all the time. In addition to her parents, Judy is preceded in death by her husband Larry in February, 2003; her brothers, Bill Dix, and Roy Dix and his wife Juanita; and her sister June Smikle. Judy is survived by her children, Tommie Lawson and wife Sabrina of Fordland, Lisa Tatum and husband Jeff of Ozark, Missouri, Brenda Kerns and husband Richard of Marshfield, Missouri, and Jeremiah Lawson; twelve grandchildren, Lacey and Ricky Stacey, Justin Tatum, Katie and Cole Atnip, Abby Lawson, Wyatt Lawson, Garrett and Rebecca Harleman, Josie Harleman, Kodie Kerns, Jaden Harleman, Zoey Kerns, and Gunner Lawson, and Tate Lawson and their mother Brenda Sherman; and five great-grandchildren, Kensley Stacey, Roper and Remi Tatum, and Kimber and Jeremiah Harleman. She is also survived by her brother R.D. Dix and his wife Doris; brother-in-law David Smikle; a host of nieces and nephews, and great-nieces and great-nephews; and many more dear friends and neighbors. While some people are a dime a dozen, there was truly only one Judy. She will be lovingly remembered as a fun spirit who loved her family dearly. She will be sadly missed by all those blessed enough to know and love her. Memorials are requested to the American Heart Association and may be left at the funeral home.

Judy Lawson, beloved mother, grandmother and great-grandmother, unexpectedly departed this life the afternoon of May 13, 2021, at Mercy Hospital in Springfield, Missouri. She was seventy-five years of age. One of five children, she was born... View Obituary & Service Information

The family of Judy Kay Lawson (Seymour) created this Life Tributes page to make it easy to share your memories.