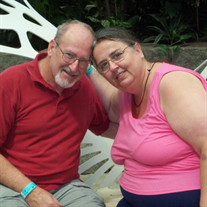 June Ann Thorington was born March 4, 1959, in Hanford, Benton County, Washington. She was raised in numerous cities, including Syracuse, New York, until moving to Carthage, Missouri, in 1978. In the summer of 1978, at the age of 19, June met her soulmate and love of her life, Terry L. Spangler. Attraction instant and love immediate, they were married on August 27, 1978. June was a dedicated homemaker and companion. They lived in Carthage before moving to Phoenix, Arizona, then Tacoma, Washington, where she received one of her proudest accomplishments, her G.E.D. After their next move to Haverhill, England, the couple returned to Carthage, then Springfield and Mansfield, before settling in Seymour in 1993, making it their forever home. Together they shared the happiest and closest 43 years that two people could. They loved yard sales and antiquing, and fishing in spare time. June was a woman of faith and believed in the positive power of prayer. She was always more concerned with the well-being of others than her own, even to the very end. She was a staunch ally of all animals, but considered her cats to be her babies, and rescuing them to be her life’s calling. She was always happy and a positive thinker. June was diagnosed with cancer in September of 2019, and after a long and hard-fought battle, she passed away on her way home to Seymour on May 6, 2021. June left this earth much too soon at the age of 62. June was preceded in death by her parents, Willie V. and Liselotte K. (Nadrowitz) Triplett, brother David Thorington, sister Myrtle Towndrow, niece Amanda Cummings, father-in-law John Spangler, brother-in-law John Spangler, Jr., and two sisters-in-law, Jo Ann Dalton, and Tracy McIntyre and her husband Bill. June had also laid to rest her beloved felines, Sybil, Charlie (Sir Charles), Pandora, Elsie, Frosty, Gabrielle, and Belle. June leaves behind her deeply devoted and loving husband Terry, and their fur babies, Katie, Selena, and Sissy; three sisters who loved her dearly, Lesa Triplett, Winnie Louden, and Debbie Bailey; her mother-in-law Barbara Spangler, and stepmother-in-law Ann Spangler; and brother-in-law Heath Spangler. June was a caring aunt to her nieces and nephews, Candace Cummings, Jennifer Cummings, David Cummings, Noah Hampton, and Ryan Dalton, and a host of great-nieces and great-nephews.

June Ann Thorington was born March 4, 1959, in Hanford, Benton County, Washington. She was raised in numerous cities, including Syracuse, New York, until moving to Carthage, Missouri, in 1978. In the summer of 1978, at the age of 19, June... View Obituary & Service Information

The family of June Ann Spangler (Seymour) created this Life Tributes page to make it easy to share your memories.