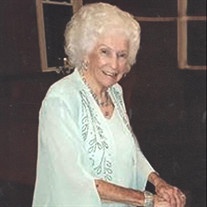 Kathryn Adkins Jenkins, daughter of Lewis and Ruby Clinkenbeard Adkins, was born September 20, 1924, in Lebanon, Missouri. She departed this life Sunday, November 28, 2021, surrounded by her family in Mercy Hospital, in Lebanon, Missouri, at the age ninety-seven years, two months, and two days. On December 27, 1941, she was united in marriage to Carlos Payton Jenkins and to this union one daughter and two sons were born. She was preceded in death by her parents; her husband of forty years, Carlos, on October 20, 1981; a son, Carlos Richard “Dick” Jenkins; a son-in-law, Donald Walters; a grandson, Bryan Jenkins; five brothers, Robert, Lewis, Gilbert, Clifton, and Billy Joe; and three sisters, Exie, Helen, and Nadine. Kathryn is survived by a daughter, Paula Walters, of Lebanon, Missouri; a son, Larry Jenkins, and his wife, Maggie, of Bella Vista, Arkansas; nine grandchildren, Lori Berry, and her husband, Chris, Christi Harmon, and her husband, Cody, Dawn Henry, and her husband, Casey, Michelle Paulsen, and her husband, Justin, Tim Jenkins, and his wife, Katrina, Annette Denny, and her husband, Keith, Dustin Jenkins, and his wife, Lindsey, L. J. Jenkins, and Destiney, and Jeff Walters; nineteen great-grandchildren, Caydence, Emmary, Harli Jo, Memphis, Hunter, Haley, Taylor, Noah, Leryn, Nickie, Whitney, Kassi, Jaden, Kilen, Caden, Montana, Gavin, Whitley, and Hazel; four great-great-grandchildren, Brantley, Mayley, Blakely, and Quincy; a sister, Mary Van Stavern, and her husband, Bob, of Lebanon, Missouri; a number of nieces and nephews; as well as a host of other relatives and friends. She was a direct descendant of one of Lebanon’s pioneer families, the Adkins, which predated the Civil War. She was born and raised in the Lebanon area and lived most of her life here. After she and Carlos were married, they made their home in Lebanon and lovingly raised their family. Kathryn was a devoted homemaker to her husband and family and also worked as a sales clerk for a custom drapery company. She later worked at Griffith’s Fashions and Bonnie’s Place for several years. She was always meticulously dressed and had even modeled in some of the local fashion shows. She also served as an election judge for a number of years. Kathryn made her profession of faith in Christ early in her life under the ministry of Rev. J. L. Stone, and was a longtime active member of First Baptist Church in Lebanon. She had been a Sunday school teacher, was active in the Ladies Circle, the R.A.D. – G.A.S. and many other areas of church work. She read her Bible daily and prayed for the lost and those who were in need. She had also volunteered as a Pink Lady at the hospital and was involved in the P.T.A. when her children were in school. Her family was most important to her and she centered her life around her family and her faith. She loved her family dearly and especially her grandchildren, great-grandchildren, and great-great-grandchildren. Kathryn was a loving mother, grandmother, great-grandmother, great-great-grandmother, sister, aunt, and was a caring friend. We celebrate her life and her accomplishments and know that her family and friends will cherish the wonderful memories she created for them during her lifetime. Funeral services for Kathryn Jenkins will be Saturday, Dec. 4 at 2 p.m. at First Baptist Church of Lebanon. Visitation will be held Friday evening from 6 - 7:30 p.m. at Holman-Howe Funeral in Lebanon, Missouri. A memorial to Christians United For Israel has been established and contributions may be made through the funeral home.

The family of Kathryn Jenkins (Lebanon) created this Life Tributes page to make it easy to share your memories.