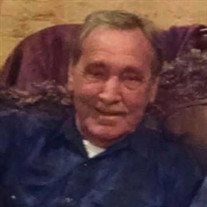 Kenneth Paul Appleberry, son of James and Dottie Higgins Appleberry, was born October 23, 1940 in Corkery, Missouri. He departed this life Saturday, May 1, 2021, in Mercy Hospital, in Springfield, Missouri, at the age of eighty years, six months, and nine days. On October 3, 1991, he was united in marriage to Jacqueline Lynn Rogers, and they shared the last twenty-nine years. He was preceded in death by his parents; his first wife of eighteen years, Nancy Greco Appleberry; and a sister, Mildred Perry. Kenneth is survived by his wife, Jacqueline, of the home; seven children, James Appleberry, and his wife, Eyvalee, of Springfield, Missouri, Debbie Brake, and her husband, Greg, of Springfield, Missouri, Beckey Crowder, and her husband, John, of Elkland, Missouri, Kenneth “Bo” Appleberry, and his wife, April, of Republic, Missouri, Jenna Rogers, and her husband, Ben Cloutier, of Beebe, Arkansas, Kalli Appleberry, and her husband, Chris Dieman, of Plato, Missouri, and Samantha Appleberry, and her husband, Edward Keel, of Jefferson City, Missouri; and; a number of grandchildren and great-grandchildren; as well as a host of other relatives and friends. He was raised in the Lebanon area and received his education there. He then lived in California for a time before returning to Lebanon and making his home. Throughout the years, he worked as a concrete finisher. After he and Jacqueline were married, they made their home in the Buffalo, Missouri area. Kenneth loved the Lord and was a lay evangelist/preacher in the Pentecostal faith. He enjoyed being outdoors where his favorite activities were fishing, camping, and coon hunting. He was a big fan of the Kansas City Chiefs Football Team. He was very strong willed and was steadfast in his convictions. He loved his family and especially enjoyed having time with his grandchildren and great-grandchildren. Kenneth was a loving husband, father, grandfather, great-grandfather, and was a caring friend. We celebrate his life and know that his family and friends will hold tight to the wonderful memories he made for them during his lifetime. A memorial to the Old Bolles Cemetery has been established and contributions may be made through the funeral home.

Kenneth Paul Appleberry, son of James and Dottie Higgins Appleberry, was born October 23, 1940 in Corkery, Missouri. He departed this life Saturday, May 1, 2021, in Mercy Hospital, in Springfield, Missouri, at the age of eighty years, six months,... View Obituary & Service Information

The family of Kenneth P. Appleberry (Lebanon) created this Life Tributes page to make it easy to share your memories.