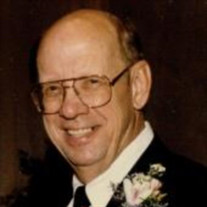 Kenneth Mades, son of the late Waldo & Regina (Becker) Mades, was born on December 31, 1933 and departed this life on December 10, 2021. At the time of his passing, he was eighty-seven years, eleven months and ten days of age. He was preceded in passing by his parents; his first wife, Bonnie Newell; two children, Jeanne Mades and Deryck Gapen; and one sister-in-law, Marjorie Mades. He is survived by his wife, Mary Lou Mades; three children, Richard & wife Rae Mades, Charlotte Mades & partner Joe May and Scott & wife Rosanna Gapen; eight grandchildren, Marcy & husband Mark Gerber, Katlynn & husband Charlie Stark, Kyndra Mades, Neva Mades, Michael & wife Erica Mades, Alex Mades, Sage Gapen and Ayla Gapen; nine great-grandchildren; and one brother, John Mades. He also leaves behind a host of many friends and other family members who will all truly miss him. Kenneth was born, raised and graduated from high school in St. Charles, Missouri. Shortly following his high school graduation, he enlisted in the United States Army, proudly serving his country for two years. While enlisted in the Army and stationed at Ft. Bliss, he returned home to St. Charles on leave in 1955 and was united in marriage to Bonnie Newell. Together they shared thirty-eight years of marriage until her passing in 1993. Together they owned and operated Ken’s Auto Supply and enjoyed camping and traveling across the country. Kenneth made a profession of faith and was a member of Community Christian Church (Disciples of Christ). Not only was he a member of the church, was very involved, serving as a Deacon, President of church board, rang the bells, and singing in the church choir. While singing in the church choir, he met Mary Rettke, who also sang in the choir and was very involved with the church. On November 9, 1995, they were united in marriage and shared twenty-six years of marriage until his passing. He was a loving and a caring neighbor and friend. We celebrate his life and his accomplishments and will treasure the memories he created for his family and friends. Memorial donations may be made to The Salvation Army and mailed to Allee Holman Howe Funeral Home, 15 Clint Ave, Camdenton, MO 65020 or left at the church the day of the service. Arrangements are under the direction of Allee-Holman-Howe Funeral Home of Camdenton. To send flowers to the family or plant a tree in memory of Kenneth Mades please visit our Tribute Store.

Kenneth Mades, son of the late Waldo & Regina (Becker) Mades, was born on December 31, 1933 and departed this life on December 10, 2021. At the time of his passing, he was eighty-seven years, eleven months and ten days of age. He was preceded... View Obituary & Service Information

The family of Kenneth Mades (Camdenton) created this Life Tributes page to make it easy to share your memories.