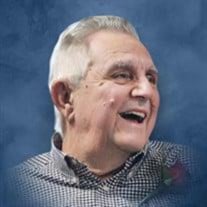 .Kenneth Ray Morrison of Ozark, MO passed away on February 20,2022 at the age of 92. While Kenny managed to steer clear from Covid these last two years, in the end it was his love of ice cream, pie and cookies that his arteries could no longer take. Kenny was born on Valentine’s Day 1930 to Paul and Sara May Morrison of Humansville and lived there until 2015 when he moved to NorthPark Village in Ozark. It was at NorthPark that he returned to fiddle playing, entertaining his fellow residents on a regular basis. He graduated from Humansville High School in 1948 and the following year he married Martha (Andrews) who sadly lost her battle with cancer in 2009. After her passing he learned to cook. Having perfected cornbread, he declared that Martha was right: if you can read you can cook. Kenny began his career operating a milk route and built a dairy herd. He raised cattle as well. But his real love was horses. His expertise with horses led to his involvement with the Missouri Fox Trotting Horse Breed Association (MFTHBA). He was a farrier, he trained and eventually bred Fox Trotters. His stallion, Toddy’s Perfection was one of the most successful breeding stallions in the industry. Kenny was known for his honesty and character. Often customers, who resided from coast to coast would purchase a horse from him just based on his word that this horse was for them. Many of them became lifelong friends. In 1998 he was inducted into the inaugural Hall of Fame class of the MFTHBA. Kenny served on the Southwest Electric Cooperative Board for more than three decades, twice as Board President. He was a valued member of the community; he was inducted into the Humansville High School Hall of Fame in 2013. Morris Westfall, former State Representative and former State Senator, once described him ‘…..if you were to look in Webster’s Dictionary for the definition of a good person of strong character it would say Kenny Morrison without a doubt’ He was a great storyteller. It could be about anything from horses to people; he just loved to retell a tale. His memory was so sharp that he could even recount the weather on that specific day. Kenny attended the Humansville United Methodist Church for his entire life. In recent times he was proud to announce that he was the oldest living member of this church. That accolade now falls to his lifelong friend Bob Kimes of Humansville, who was born six months after Kenny. He is survived by his children Donna and husband Jim Huffman of Ozark, Kenny Paul and wife Helene of St. Louis, Debbie Murray of Springfield, and Dennis and wife Nancy of Kansas City. His 9 grandchildren: Casey and husband Alex Dakin, Brad and wife Lindsey Huffman, Kristen and husband Lance Lewis, Jay and wife Julie Morrison, Sarah and husband John Olson, Andrew Morrison, Abby and husband Nick Mahon, Claire VanZante, and Matthew Morrison. He is survived by 13 great grandchildren: Chase Barclay, Brenner Barclay, Reece Huffman, Reagan Huffman, Rosalyn Huffman, Madison Lewis, EJ Lewis, Blake Morrison, Katherine Morrison, Benjamin Olson, Noah Olson, Hope Mahon and Hunter Mahon. He was preceded in death by sister Mildred Floyd and brother Malvern. He is survived by his youngest sister Norma Pitts of Bolivar. The visitation will be held Saturday, February 26,2022 at 10 am at the Humansville United Methodist Church with the funeral to follow at 11 am. Please join us to celebrate a life well lived. In lieu of flowers the family encourages donations to Humansville United Methodist Church, PO Box 164, Humansville, MO 65674-0164 or the Humansville Cemetery, Humansville City Hall, PO Box 144, Humansville, MO 65674-0144, Attn: Mark Keller. To send flowers or a memorial gift to the family of Kenneth Ray Morrison please visit our Sympathy Store.

.Kenneth Ray Morrison of Ozark, MO passed away on February 20,2022 at the age of 92. While Kenny managed to steer clear from Covid these last two years, in the end it was his love of ice cream, pie and cookies that his arteries could no longer... View Obituary & Service Information

The family of Kenneth Ray Morrison (Bolivar) created this Life Tributes page to make it easy to share your memories.