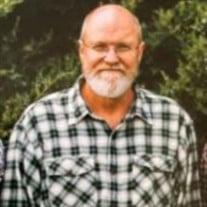 Kenneth Glen Moulder, son of Rolla Glen and Pauline Jeffries Moulder was born on October 25, 1961 in Laclede County, Missouri. He departed this life Wednesday, September 15, 2021 at Springfield Villa in Springfield, Missouri at the age of fifty-nine years, ten months and twenty-one days. On August 18, 1984, he married his high school sweetheart, Tami Wilson. Kenny and Tami shared thirty-seven years together and were blessed with four children. Kenny was preceded in death by his maternal grandparents, Elmer and Bethel Jeffries; paternal grandparents, Grover and Fannie Moulder; parents Rolla and Pauline Moulder; and brother-in-law Chris DeSpain. He is survived by his wife, Tami of the home; daughter, Megan Brenner and husband Ryan of Shawnee, Kansas; son, Daniel Moulder and wife Kristen of Macks Creek, Missouri; daughter, Abigail Moulder of Osage Beach, Missouri; and son, Austin Moulder and wife Casey of Branson, Missouri; three grandchildren Harrison Reese Brenner, Emma Pauline Brenner, and Amelia Grace Moulder; two sisters Judy DeSpain of Linn Creek, Missouri and Connie Jung and husband Craig of Kenai, Alaska; father and mother-in-law, George and Sue Wilson of Springfield, Missouri; brother-in-law, Eric Wilson and wife Kelli of Crane, Missouri; and sister-in-law, Tara Ray of Springfield, Missouri; as well as a host of nieces, nephews, other relatives, and many friends. Kenny was raised in Camden County and attended Linn Creek and Camdenton Schools, graduating in 1980. He was a devoted and loyal employee, working for the same employer for over forty years. At the age of fourteen, he stocked shelves and bagged groceries at Ezard’s Grocery store in Osage Beach, Missouri, later becoming a meat cutter. For approximately thirty years, he worked at Ezard’s Ace Hardware. While there, he established many friendships with coworkers and customers. One customer even stated he knew when Kenny was working by the music that was playing on the intercom when he entered the store. Kenny made a profession of faith and was baptized at a young age. He was a lifelong member of Linn Creek United Methodist Church. Kenny loved watching Chiefs football, Cardinals baseball, and Nascar races. He was a huge Dale Earnhardt and Dale Earnhardt Jr. fan. He attended the first Brickyard race in 1994 and continued attending this race for the next twenty-three years. He especially enjoyed the races where he was able to take his sons along. Kenny also enjoyed hunting and fishing and took several memorable hunting trips. He loved nothing more than cooking for his family and friends as well as a good joke, prank, or laugh. His greatest joy was spending time with his family. He cherished every moment spent with family. Kenny was a loving husband, father, grandfather, son, brother, uncle, and friend. We celebrate his life and accomplishments and will treasure the memories he created for his family and friends. Kenny’s family extends a heartfelt thank you for the many cards, letter, thoughts and prayers from family and friends, and we are grateful for those who visited him and us over the two past years. To the staff, nurses and doctors of Springfield Villa and Hospice, we cannot express enough our sincere thanks for the love and care you provided for Kenny. In particular, we want to thank DeeJay for his professionalism, friendship, and love-for always being there for Kenny and our family. We truly believe you are an angel sent to us just when we needed one. Funeral services will be held at 10:00 a.m., Saturday, September 25, 2021 in Allee-Holman-Howe Funeral Home, Camdenton, Missouri. Burial will follow in Freedom Cemetery, Montreal, Missouri. Visitation will be from 5:00 p.m. to 8:00 p.m., Friday evening, September 24, 2021 in the funeral home. Memorial donations in memory of Kenny may be made to Linn Creek United Methodist Church or St. Jude's Children Hospital and left at the funeral home. Arrangements are under the direction of Allee-Holman-Howe Funeral Home of Camdenton, Missouri. To send flowers to the family or plant a tree in memory of Kenneth "Kenny" Glen Moulder please visit our Tribute Store.

Kenneth Glen Moulder, son of Rolla Glen and Pauline Jeffries Moulder was born on October 25, 1961 in Laclede County, Missouri. He departed this life Wednesday, September 15, 2021 at Springfield Villa in Springfield, Missouri at the age of fifty-nine... View Obituary & Service Information

The family of Kenneth "Kenny" Moulder (Camdenton) created this Life Tributes page to make it easy to share your memories.