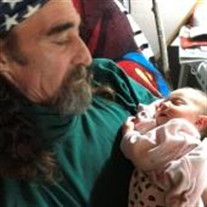 Kenneth Homer “Kenny” Mustain, son of the late Lloyd & Rita (Boisselle) Mustain, was born on December 26, 1962 and departed this life on December 25, 2021. At the time of his passing fifty-eight years, eleven months and twenty-nine days of age. He was preceded in death by his two sons, Shadrick and Alex Mustain; one brother, Phillip; and his parents. He is survived by his wife, Karen Mustain; three children, Ashley Mustain, Taylor Mustain and Dakota Mustain; seven siblings, John Mustain, Ronnie Mustain, Mark Mustain, Brad Mustain, Tracey Kabicki, Oliva Kennedy and Annie Mustain; and one grandchild, Maeve Paschel. He also leaves behind a host of many friends and other family who will all truly miss him. Kenneth was born in Olathe, Kansas and at an early age moved to Camdenton, Missouri where he would later graduate from Camdenton High School; later attending college where he earns his associates degree. Shortly after he finished his schooling, he enlisted in the United States Navy, where he proudly served his country for four years. Once he returned home from his time of service, he worked various jobs and that would eventually lead to him meeting Karen Sturgis. Together they were later united in marriage on May 20, 1995 and to this union five children were born. In his spare time, he enjoyed being outdoors spending his time hunting and fishing. He was a loving and a caring neighbor and friend. We celebrate his life and his accomplishments and will treasure the memories he created for his family and friends. Arrangements are under the direction of Allee-Holman-Howe Funeral Home of Camdenton, Missouri. To send flowers to the family or plant a tree in memory of Kenny Mustain please visit our Tribute Store.

Kenneth Homer &#8220;Kenny&#8221; Mustain, son of the late Lloyd & Rita (Boisselle) Mustain, was born on December 26, 1962 and departed this life on December 25, 2021. At the time of his passing fifty-eight years, eleven months and twenty-nine... View Obituary & Service Information

The family of Kenny Mustain (Camdenton) created this Life Tributes page to make it easy to share your memories.