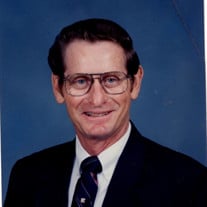 Chief Master Sergeant Larry Don Nutter, the fifth of seven children of James Barton and Mary May Presley Nutter, was born June 24, 1935, near Lebanon, Missouri. He departed this life Sunday, July 18, 2021, in his home, at the age of eighty-six years, and twenty-four days. In 1956, he was united in marriage to Mary Anne Lewis, and to this union two daughters and one son were born. On October 16, 2006, he married Gerry Howe Hoke, and they shared the last fourteen years. He was preceded in death by his parents; a son, Larry David Nutter; three brothers, Thomas, Jack, and Jerry Nutter; and two sisters, Bonnie Hill, and Doris Sherrer. Larry Don is survived by his loving wife, Gerry, of the home; two daughters, Nancy White, and her husband, Robert, of Manila, Arkansas, and Connie Rangel, and her husband, Fernand, of Slidell, Louisiana; eleven grandchildren, David White, Samuel White, Deborah Howell, Rebekah Gulley, Meredith Cornwell, Melissa Cottrill, Simon Nutter, Mallory Nutter, Kevin Green, Shaun Green, and Brian Green; twenty-two great-grandchildren; a brother, William “Bill” Nutter, of Lebanon, Missouri; Gerry’s children, Jason Hoke, and his wife, Belinda, of O’Fallon, Missouri, Stephanie Bray, and her husband, Dr. Phil, of Macon, Missouri, and Rachel Griffin, and her husband, Kasey, of Ash Grove, Missouri; Gerry’s grandchildren, Ethan, Seth, Genesis, Jonathan, Nathanael, Jubilee, and Josiah Bray, Caleb and Sarah Hoke, and Payton and Brady Griffin; a sister-in-law, Jewell Nutter; a brother-in-law, Kenneth Howe, and his wife, Valerie; several nieces and nephews; as well as a host of other relatives and friends. He was born and raised in the Lebanon area, and attended Lebanon High School. He entered the military as a young man and served his country faithfully in the United States Air Force for twenty-eight years. During his service he was stationed in Japan, Thailand, Guam, and several locations stateside. He was the Flightline Crew Chief over the B-52 Bomber and KC-135. In 1980, he was honorably discharged from the Air Force having obtained the highest rank possible for an NCO, and returned to the Lebanon area and made his home. He was an active member of V.F.W. Post # 4107 in Lebanon and was a past Post Commander and District 18 Commander. He was also a part of the V.F.W. Honor Guard for many years. During his retirement he enjoyed being outdoors where he raised cattle, horses, goats, and dogs and appreciated all of God’s Nature. He loved his home place and liked caring for his home and land. At one time he decided to raise baby skunks, but realizing that they “might” turn on him, he chose to release them back to the wild. He enjoyed listening to country music and was an accomplished artist who mastered oil paintings of natural landscapes. His family was very important to him and he cherished every moment he shared with each one. Larry Don was a loving husband, father, grandfather, great-grandfather, brother, uncle, and was a caring friend. We celebrate his life and his accomplishments and know that his family and friends will hold tight to the wonderful memories he made for them during his lifetime. A memorial has been established to Claws & Paws and donations may be left at the funeral home.

Chief Master Sergeant Larry Don Nutter, the fifth of seven children of James Barton and Mary May Presley Nutter, was born June 24, 1935, near Lebanon, Missouri. He departed this life Sunday, July 18, 2021, in his home, at the age of eighty-six... View Obituary & Service Information

The family of Larry Don Nutter (Lebanon) created this Life Tributes page to make it easy to share your memories.