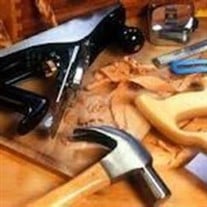 Larry Ray Rice, husband, father, grandfather, great grandfather, friend, bartender, and so much more, passed away Monday, June 21, 2021, at the age of 82. Larry was born the middle son of Ona Francis Rice (Williams) and Harvey Lincoln Rice, on February 12, 1939, in the small town of Albion, Illinois. Larry grew up living the small-town farm life, causing mischief and raising hell with his brothers, Kenneth and Darius. He never took to farm life though and began working in town in the local movie theatre at the age of 14. His father always said Larry was “his city boy”, his mother said that “he was just too pretty to work on the farm”. The small-town life had left him restless for travel. Larry joined the Navy at the age of 18 after he graduated high school and had moved out of the family home. Aboard the USS Moale, Larry earned the rank of Ship Serviceman Third Class, where he served as an artillery caller, ran the ships’ store and laundry. He had a great many adventures, meeting with interesting people, sharing stories and meals, learning and appreciating the different cultures, bringing home a love for long dinners and red wine. He saw fantastic places later recalled to his grandchildren; Europe, Italy, Japan, the Bahamas, etc. He told such amazing stories of his service years; so much so that one could almost fall in love with Navy life. After serving his full 6 year contracted term, Larry was honorably discharged, and narrowly avoided being drafted for the Vietnam War. After this stroke of luck, in 1964 in his brand new 1964 Chevy, Larry moved to the big city as he always wanted, and the city he chose was Las Vegas. First arriving in Las Vegas, he drove an ice cream truck owned by his Uncle Smokey. He chose the trade of bartender in the city of sin, still driving the ice cream truck during the day to support his family as he transitioned into this new career. He eventually took up residence at the Desert Inn Casino, leaving his ice cream hat behind, and served visitors and locals alike for over 20 years. Larry fell in love with the Old Vegas lifestyle, how everyone dressed up when they went out, how the house always made sure a fella had enough money in his pocket at the end of the night to get home”- old school principles. After many years of dedicated service, Larry moved on to the Gold Coast Casino to continue to serve by these old school principles of respect and individuality. He served as a much beloved bartender and bar manager for, once again, more than 20 years, bringing his total bartending career to more than 45 years before he retired at the age of 68. Las Vegas is also where Larry met the women that would be his wives and the mothers to his children, the beginning to the large and wonderful family that would fill his house with joy and love. In 1978, Larry and Barbara Jean Stout met while both working at the Desert Inn and had their first date on Valentine’s Day of that year. On June 10th, 1982, they were married in Virginia City, Nevada, at the Silver Queen Saloon and became Mr. and Mrs. Larry Rice. They had just celebrated their wedding anniversary, together for 43 years, married for 39. In his later years, Larry and Barbara split their time between Tunas, Missouri, at the family farm, and Las Vegas, Nevada, at the home he built on and loved, that was often, if not most of the time, filled to the brim with friends, kids, food, and laughter. As soon as anyone would walk through the door, his face would light up, he would give you a big hug and a warm and hearty hello and immediately would offer you a drink. His presence always meant some place safe. He had nothing but a kind word for anyone he met, because even if he didn’t know you or agree with you, he still believed in you and wanted nothing but happiness for everyone around him, and especially those closest to him. He will be greatly missed by so many friends and his huge family that loved him so much. He is preceded in death by his parents, Harvey and Ona, his brother, Darius, and he is survived by his wife, Barbara, his brother, Kenneth, his seven children, Brian, Cheryl, Larry, Dellos, Kevin, Jenna, and Tracy; seventeen grandchildren, numerous great-grandchildren, and so many other family members and friends, whom he all considered adopted family. We love you. Pops, Grampa, Uncle Larry. See ya later. To send flowers or a memorial gift to the family of Larry Ray Rice please visit our Sympathy Store.

The family of Larry Ray Rice (Buffalo) created this Life Tributes page to make it easy to share your memories.