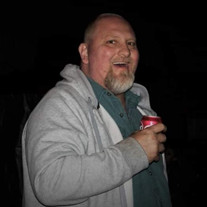 Lee Aaron Harris was born March 23, 1974, in Springfield, Missouri, to Jimmy Lee and Connie Laverne (Cornelison) Harris. At the much too young age of 47, while surrounded by family in Mercy Hospital, Lee peacefully departed this life on August 26, 2021, after a courageous year-long battle with lung cancer. Lee grew up in Seymour and attended Seymour schools. He was raised in the Seymour Church of Christ. Lee received his IT Certification at Vatterott and was employed as a CNC laser programmer; he was very talented at his job. Family man and grandpa – that was Lee. His favorite pastime was going to the creek – no matter how bad he was feeling – he loved time spent at any creek. Lee especially enjoyed the times when kids and grandkids could join him, and they’d play all day. Lee was big-hearted. He loved all his family the same – blood relative or not – if they were family, they were family, and nothing less. Devoted to each other since 2006, Lee and Breeanna Lauren McAninch were married on February 14, 2015, and made Marshfield, Missouri, their home; she survives. Lee was a fun-loving and caring dad to his children, son Kerry Harris, son Aaron Harris and his wife Jonie, daughter Corina Barnes, son Steven Moore, daughter, Cheyennea Moore, daughter Taylor Ward and her significant other Jack Zimmerman, son Cameron McAninch, son Colt McAninch, and daughter Kara Harris. He was the dearly loved brother of Jill Kimball and her husband Gene of Seymour. Lee has numerous aunts and uncles and was especially close to his aunts, Sue Duvall, and Donna Batcheller and her husband Jack, and his uncle Robert Cornelison – all of Springfield, and his aunts Nancy Cornelison and Betty Harris – both of Marshfield, and Rachel Witty of Webb City, Missouri. Gone before Lee were his grandparents, parents, and father-in-law Thomas Wayne Stevens. Lee will be sadly missed and fondly remembered by all those blessed enough to know and love him. In lieu of flowers, memorials may be to the family and left at the funeral.

Lee Aaron Harris was born March 23, 1974, in Springfield, Missouri, to Jimmy Lee and Connie Laverne (Cornelison) Harris. At the much too young age of 47, while surrounded by family in Mercy Hospital, Lee peacefully departed this life on August... View Obituary & Service Information

The family of Lee Aaron Harris (Seymour) created this Life Tributes page to make it easy to share your memories.