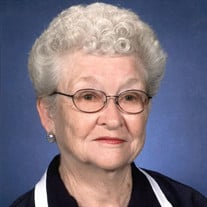 Lela Marie Donigan, daughter of Homer and Lula Rusher Smith, was born November 29, 1929, in Sharon, Oklahoma. She departed this life Tuesday, April 12, 2022, in her home in Lebanon, Missouri, at the age of ninety-two years, four months, and thirteen days. On May 28, 1949, she was united in marriage to Sterling Elsworth Donigan and to this union one daughter and two sons were born. She was preceded in death by her parents; her husband, Sterling, on July 29, 1985; a son, Bruce Donigan; a grandson, Michael Frazier; and a sister, Virginia. Lela is survived by a daughter, Beverly Donigan Frazier, of St. James, Missouri; a son, Mark Donigan, of Lebanon, Missouri; a granddaughter, Kimberly; a brother, Homer Smith, of Phillipsburg, Missouri; a daughter-in-law, Mary Donigan; a son-in-law, Danny Frazier; several nieces and nephews; as well as a host of other relatives and friends. She was raised in the Phillipsburg, Missouri area, and graduated from Phillipsburg High School. Early in her life after she and Sterling were married, she worked as a teller at State Bank of Lebanon for a few years before they moved to Rolla and Fort Leonard Wood following Sterling’s work. Lela was a devoted homemaker to her husband and family through the years. After retiring, they moved to Lebanon and made their home. Lela had made her profession of faith in Christ and was an active member of Second Baptist Church in Lebanon. Her faith was very important to her and she enjoyed the fellowship her church had to offer. In her spare time she enjoyed sewing, and crocheting. She loved her family dearly and especially liked having time with her granddaughter. Lela was a loving mother, grandmother, sister, aunt, and was a caring neighbor and friend. We celebrate her life and know that her family and friends will cherish the wonderful memories she created for them during her lifetime.

Lela Marie Donigan, daughter of Homer and Lula Rusher Smith, was born November 29, 1929, in Sharon, Oklahoma. She departed this life Tuesday, April 12, 2022, in her home in Lebanon, Missouri, at the age of ninety-two years, four months,... View Obituary & Service Information

The family of Lela Marie Donigan (Lebanon) created this Life Tributes page to make it easy to share your memories.