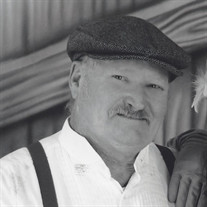 Leonard “Ray” Volner, son of Orville William and Martha Ann (Skaggs) Volner, was born June 15, 1955, in Springfield, Missouri. He departed this life Friday, July 16, 2021 at his home in Hartville, Missouri, at the age of sixty-six years, one month and one day. Ray was a jack of all trades; from trimming trees to working at the sawmill, but he was truly gifted as a mechanic, he could simply listen to a car and tell you exactly what the problem was and how to fix it. He was one of the best mechanics. On July 8, 1975 Ray married Barbara Parsons and to this union five children were born. He met Becky Tooley in 1997 and they have stayed by each other’s side since and she survives of the home. Also surviving are his children; Dennis Volner, Johnathan Volner, Rachel Volner all of Hartville, Missouri, Amanda Volner and Brian Champagne of Mountain Grove, Missouri and Elizabeth “Betsy” Sybert and her husband Shannon of Hartville, Missouri; 28 grandchildren; Mikayla, Robbie, Matthew, Teanna, Ethan, Carter, Jaden, Crayton, Brandon, Christopher, Haley, Paige, Damon, Chloe, Cass, Brittany, Nathan, Taylor, Anthony, Chelsey, Daryn, Carson, Constance, Skye, Theodore, Sebastian, Chase and Grace; seven great-grandchildren; sisters; Ethel Massey of Idaho, Dixie Moore of Mountain Grove, Missouri, Shirley Crossland of Hartville, Missouri, Darlene Lambert of Craig, Missouri, Linda Lamb and her husband Michael of Kentucky, Phyllis and Frankie Parsons of Hartville, Missouri; brothers; Lee Volner of Lebanon, Daniel Volner of Hartville, Missouri and Ulas Volner of Mountain Grove, Missouri, nieces, nephews, other relatives and friends. Ray was preceded in death by his parents, a grandson, Austin Beggs, two brothers, Benny and Bulas Volner and two sisters, Diana Rhodes and Freda Bell Headings. Ray was a member of Life 360 Church in Hartville, Missouri. In his spare time, he enjoyed camping, fishing and most of all spending time with his family, especially his grandchildren. Ray was a loving husband, father, grandfather, great-grandfather, brother, uncle, neighbor and friend. We celebrate his life and will treasure the many wonderful memories he has created. Memorials to the family may be made through Holman Howe Funeral Home, P.O. Box 236, Hartville, Missouri 65667.

The family of Leonard "Ray" Volner (Hartville) created this Life Tributes page to make it easy to share your memories.