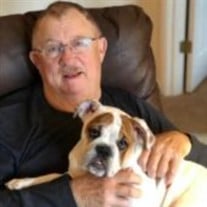 Lester Eugene Nunn was born on February 23, 1950 in Marshfield, Missouri. It was in Marshfield that he spent his childhood, graduated from high school, met and married the love of his life, and raised his three daughters. Les worked at Show Me Power for over 25 years where he made many lifelong friends and pioneered many new technologies in his field. He retired to Lake of the Ozarks to be near his daughters, sons in law, and grandchildren. Les married his beloved wife, Jan, on June 15, 1969. He was a devoted husband and together they modeled an enduring love for their children and grandchildren that served as an inspiration and guide stone for almost 52 years. His most cherished gift was Jan, and until the day he left his earthly home it saddened him greatly to leave her. Les was a devoted, fiercely protective, and proud father of his three daughters. He never missed a ballgame or the birth of any of his grandchildren. As the young father of two babies he worked overnight shifts at a Texaco service station while attending college full time with a dream of providing a better life for his family. His work ethic and belief in them made his daughters believe that they could accomplish anything that they put their minds to. Most importantly, he taught his daughters their faith in Jesus Christ. This is his legacy. His grandchildren — Four beloved granddaughters and five cherished grandsons— will forever be imprinted with a lasting legacy of faith because their Poppy boldly led his family into a deeper walk with Christ as a young father. Les left this earth with the most beautiful sunrise on Sunday morning, May 30th, 2021. He was surrounded by his wife, daughters and grand daughters. He was welcomed into Heaven by his mom and dad (Ethel and Speck Nunn), his brothers (Tom and Mike), and his best friend (Edgil Prewitt.) He is survived by his wife, Jan; Jeff and Stacy (Shore), Sophie, Bo, and Bear; Travis and Stephanie (Ezard), Dallas, Jackson, Cooper, and Ellie; Frank and Natalie (Tristan), Hays, and Taylor. Les left his family with the greatest gift by blessing them with the legacy of faith that will live on in each one of them until they meet him again in Heaven. Graveside services will be held 10:00 a.m., Thursday, June 3, 2021 in Marshfield City Cemetery, Marshfield, Missouri. Memorial donations may be made to C.O.P.S. and mailed to Allee-Holman-Howe Funeral Home, 15 Clint Avenue, Camdenton, Missouri, 65020. Arrangements are under the direction of Allee-Holman-Howe Funeral Home. To send flowers to the family or plant a tree in memory of Lester Eugene "Les" Nunn please visit our Tribute Store.

Lester Eugene Nunn was born on February 23, 1950 in Marshfield, Missouri. It was in Marshfield that he spent his childhood, graduated from high school, met and married the love of his life, and raised his three daughters. Les worked at Show... View Obituary & Service Information

The family of Lester Eugene Nunn (Camdenton) created this Life Tributes page to make it easy to share your memories.