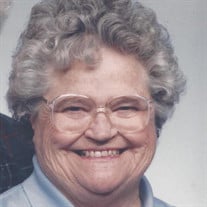 Leta Mae Logue-Henslee, age 97, went home to be with her Lord on August 17, 2021. Mae was born on May 17, 1924 to John Logue and Nola Bailey-Logue in Branson, Colorado. She was united in marriage to Loren Logue, on August 5, 1941, with whom she had two children James Logue and Connie Logue-Keys. She was an active member of the Pomona Church of God in Pomona, California. Every Sunday she was seen faithfully walking her kids to church. She moved to Hartville, MO in 1963. There she became an active member of the Hartville Church of God where she taught Sunday school, Bible school, and was a member of the church board for decades. While living in Hartville, Missouri, she helped work on her family farm, owned a bakery on the town square, and completed various jobs in the Hartville community. In 1987, Mae lost her husband of 45 years, and continued working as a full-time babysitter for members of the Hartville community. On August 7, 1993, she was again united in marriage to Berlin Henslee, of Grovespring, Missouri. Together, they moved to Hartville and regularly attended the local senior center. Mae was preceded in death by her parents; her husbands, Loren Logue and Berlin Henslee; her son, James Logue; her son-in-law, Joel Keys; her grandson, Larry Creson, and her great grandson, Blakely Creson. She is survived by her daughter Connie Keys of Springfield, Missouri and her daughter-in-law Faith Logue of Lebanon, Missouri; her grandchildren Debbie Creson of Springfield, Missouri, Ron and Amanda Keys of Willard, Missouri, and Johnathan Logue of Lebanon, Missouri; her great grandchildren, Jacob and Sarah Keys of Kansas City, Missouri, Aaron and Jenna Creson, as well as Tristan Creson, of Waynesville, Missouri, Grace Black of Springfield, Missouri, and Collin and Ellyana Keys of Willard, Missouri; and numerous nieces, nephews, great-great grandchildren, church family, and friends. We find comfort knowing that Mae is in the arms of Jesus. She will forever be remembered for her contagious love for Christ and her steadfast loyalty and commitment to her family and friends. Services will be held Saturday, Aug. 21 at 10 a.m. in the Holman-Howe Funeral Home in Hartville. Burial will be in Boyer Cemetery, west of Hartville. Memorials may be made to American Bible Society and left at the funeral home.

The family of Leta Mae Logue Henslee (Hartville) created this Life Tributes page to make it easy to share your memories.

Leta Mae Logue-Henslee, age 97, went home to be with her Lord...