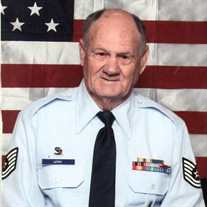 Lewis Franklin Luthy, son of Richard B. and Nellie M. Lang Luthy, was born November 9, 1930, in Springfield, Missouri. He departed this life Monday, May 30, 2022, at Lebanon South Nursing and Rehabilitation Center in Lebanon, Missouri, at the age of ninety-one years, six months, and twenty-one days. On August 12, 1955, he was united in marriage to Jeroline Fay Barnett, and they shared sixty-six years of happiness and memories. This union was blessed with one daughter and one son. He was preceded in death by his parents; a son, Lynn F. Luthy; three brothers, Tom, Richard and Bobby; and three sisters, Juanita, Gracie, and Clara. Lewis is survived by his loving wife, Jeroline, of the home, near Lebanon, Missouri; a daughter, Linda Powers, and her husband, Larry, of Waynesville, Missouri; two granddaughters, Amy and Heather Devore; a grandson, Nathaniel Powers, and his wife, Jessica, of RAF Lakenheath AFB, England; a step-granddaughter, Tammy Bone, and her husband, Richie; a brother, Preston Luthy, and his wife, Shirley, of Lebanon, Missouri; a step-grandson, Brian Powers; a great-granddaughter, Scarlett Jean; three great-grandsons, Jake, Kevin, and Caleb; a great step grandson, Josh; several nieces and nephews; as well as a host of other relatives and friends. He was raised in the Lebanon, Missouri area. He was a Korean War veteran having served from 1950 – 1953 in the United States Army. He then joined the United States Air Force and served until retiring in June of 1973. He returned to the Lebanon area and built a home for his family where he was born and raised. He worked at the Coca-Cola Bottling Plant until 1980, and then was a civil service employee at Fort Leonard Wood for several years. He retired and became a handy man for the Lebanon area, and also farmed with his brother, where they had cattle and pigs and cut and hauled hay. Lewis had made his profession of faith in Christ and was a member of Washington Christian Church. He and Jeroline enjoyed going to the Korean reunions every summer and visited several different states. Lewis and Jeroline liked going to the Hughes Senior Citizen Center where they loved to dance, and Lewis liked fishing and camping. He particularly liked fishing with his brother, Tom. He also enjoyed going to jam sessions at Preston’s house. He was very proud of his grandchildren, especially his grandson, Nathaniel, who was following in his footsteps in the Air Force. He enjoyed hearing about his achievements. His nieces and nephews always said they enjoyed Uncle Lewis’ visits. He will be missed by his family and friends and will always be in our hearts. A memorial to Phoenix Hospice has been established and donations may be made through the funeral home.

The family of Lewis F. Luthy (Lebanon) created this Life Tributes page to make it easy to share your memories.