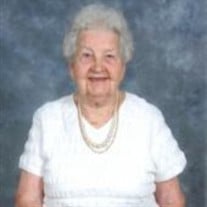 Lilly Elvina Parman, daughter of Elmer and Mabel (Peterson) Small, was born April 15, 1913 in Kansas City, Missouri. She departed this life Tuesday, August 24, 2021 in her home at the age of one hundred -eight years, four months, and nine days. Lilly was preceded in death by her parents; a son, Bobby Crews; her husband, Calvin Parman, a brother, Fred Small; two son-in-law, Howard Nance and Bill Harper; grandson Grover Pogue and two great-great-grandchildren, Noah Quinn Crews and Michael Tracz. She is survived by her daughters, Marjorie Crews and Ruth Harper, both of Camdenton, Missouri; her grandchildren, Angie Taylor and husband James, Brenda Packett, Tami Freeman and husband Billy, Sherry Pogue, Debbie Rolando and husband Tim, Michael Crews, Jimmy Crews and wife Kathy, Cathy McConniff and husband Joe, Terry Orrick and husband Tom, and Tess Hancock and husband Russ; nineteen great-grandchildren; seven great-great-grandchildren; as well as a host of other relatives, and many dear friends. Lilly was born and raised in the Kansas City area and was a graduate of Rosedale High School. After graduation, she married Earl Crews and together they had three children. When Earl was called to serve his country during World War II, Lilly went to work at a bomber plant in Kansas City where she checked the tools used to build the bomber planes. She would later go into the real estate business and was a Realtor for nearly thirty years, not retiring until she was well into her 80’s. Lilly later married Calvin Parman and the couple moved to the Lake area in 1982. She was a member of the Community Christian Church in Camdenton and until recently, still volunteered at the L.A.M.B. House. Lilly was a past president of the VFW in Kansas City. She was a founding member of the new Camdenton Senior Center and was a member of the Camdenton VFW Ladies Auxiliary, where she enjoyed spending time with her friends and participating in numerous dances and other events. She also was a member at the Lake of the Ozarks Swing Dance Club and the Lake of the Ozarks Dance Association for many years. Lilly was a fantastic dancer, with line dancing and ballroom dancing being her favorites. Hambo Latham and Jackie Newton-Banjazic were her favorite entertainers and throughout the years they developed a great friendships. While it didn’t take much to get Lilly on the dance floor, you could be assured when her favorite songs were being played that she would be front and center, dancing the night away. On her 105th birthday, Lilly was presented with a resolution from Camdenton Mayor John McNabb stating that April 15th would forever be “Lilly Crews Parman Day.” Lilly was always very conscious of her health and was a firm believer that drinking eight glasses of water a day, and dancing with friends was the key to staying youthful and living a long, full life. Lilly was deeply loved by her family and friends and they will all miss her dearly. She lived life to its fullest and never took a single day for granted, and the memories she has created will live on forever through her family and friends. To send flowers to the family or plant a tree in memory of Lilly E. Parman please visit our Tribute Store.

The family of Lilly E. Parman (Camdenton) created this Life Tributes page to make it easy to share your memories.