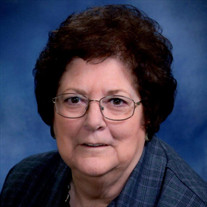 Linda Carolle Clay Satterfield, daughter of Eugene “Gene” and Josephine Davis Clay, was born October 29, 1945, in Maysville, Missouri. She departed this life Sunday, July 11, 2021, in Lebanon North Nursing and Rehabilitation Center, in Lebanon, Missouri, at the age of seventy-five years, eight months, and thirteen days. On July 15, 1979, she was united in marriage to Martin Dean Satterfield, and they shared almost thirty years before Dean’s passing on April 25, 2009. She was also preceded in death by her parents; her grandparents, Rev. W.W. and Addielle Kennedy Clay, and Mr. and Mrs. J.N. “Polly” Napoleon Davis, of Maysville, Missouri; a daughter, Carolyn Satterfield; and a sister, Beverly Clay. Linda is survived by three daughters, Deana Pederson, and her husband, Lonnie, of Phillipsburg, Missouri, Alison Good, and her husband, Steve, and Amy Ruble, and her husband, Tony, all of Lebanon, Missouri; five sons, Brad Buttram, and his wife, Brenda, Brian Buttram, Dennis Satterfield, and his wife, Jenny, all of Lebanon, Missouri, and Danny Satterfield, and his wife, Brenda, of Grovespring, Missouri, David Satterfield, and his wife Mary Ann, of Rolla, Missouri; a number of grandchildren and great-grandchildren; two sisters, Annette Descher, of Columbia, Illinois, and Jo Bettes, and her husband, Randy, of Douglas, Wyoming; three brothers, Lynn Clay, of Lebanon, Missouri, Michael Clay, and his wife, Julie, of Springfield, Missouri, and Bill Clay, and his wife, Kathryn, of Grandview, Missouri; several nieces and nephews; a special friend from high school, Sherlyn Hobbs, of Knoxville, Tennessee; as well as a host of other relatives and friends. She lived most of her life in the Lebanon area, and graduated from Lebanon High School in the Class of 1963. After she and Dean were married, they made their home near Lebanon and Linda was a devoted homemaker to her husband and family. She also worked at Mid-Way Restaurant through the years, Ted’s Jewelry, and House of Ivey. She later was a sales representative for the online catalog business at Shepherd Hills Factory Outlets and became the assistant manager of that department. Linda made her profession of faith in Christ early in her life and was a longtime member of First Baptist Church in Lebanon. In her spare time she enjoyed reading, gardening, traveling, doing crafts and counted cross-stitch projects. She loved the holidays, and enjoyed decorating the house for all of them, but especially at Christmas. Her family and friends were at the center of her life and she greatly enjoyed spending time with her grandchildren. Linda was a loving mother, grandmother, great-grandmother, aunt, and was a caring friend. We celebrate her life and her accomplishments and know that her family and friends will cherish the wonderful memories she created for them during her lifetime. A memorial to the Stroke Victims Foundation has been established and contributions may be made through the funeral home.

The family of Linda C. Clay Satterfield (Lebanon) created this Life Tributes page to make it easy to share your memories.