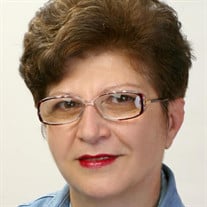 Liudmyla Sorokina, daughter of Oleksandr Dubynsky and Valentyna Cheriavska, was born June 15, 1951, in Spassik, Kazakhstan. She departed this life Tuesday, August 24, 2021, in Lebanon, Missouri, at the age of seventy years, two months, and nine days. On March 31, 1972, she was united in marriage to Volodymir Pavovych, and to this union two sons were born. She was preceded in death by her parents; her husband, Volodymir, on April 29, 2003; and a brother, Anatoly. Liudmyla is survived by two sons, Dmytro Sorokin, and his wife, Lyudmila, of Lebanon, Missouri, and Oleeksandr Solokin, of the Ukraine; three grandchildren, Anna, Darya, and David; as well as a host of other relatives and friends. She was born and raised in the Soviet Union and received her education there. For most of her life she lived in Siberia and the Ukraine where she was a devoted homemaker and also worked as an engineer. Six years ago she moved to the United States and then came to Lebanon during the past year. Liudmyla had attended Flatwoods Bible Church near Lebanon. She enjoyed going for walks and following her grandchildren’s activities. Her family was very dear to her and she especially enjoyed spending time with her grandchildren. Liudmyla was a loving mother, grandmother, and was a caring friend. We celebrate her life and know that her family and friends will cherish the wonderful memories she created for them during her lifetime. Funeral services will be Thursday, Aug. 26, 2021 at 2 p.m. at Flatwoods Bible Church with Pastor Kenneth Foltz officiating. Burial will follow in Flatwoods Cemetery.

The family of Liudmyla Sorokina (Lebanon) created this Life Tributes page to make it easy to share your memories.