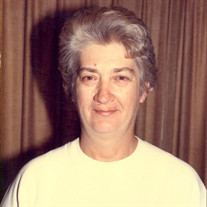 Lois Forresten Adams was born July 17, 1932, in Ponca City, Oklahoma, and departed this life Friday, September 24, 2021, in Mercy Hospital, in Springfield, Missouri at the age of eighty-nine years, two months, and seven days. On May 23, 1959, she was united in marriage to Bill Adams, and they shared a number of years together. Bill passed away on May 23, 2021. She was preceded in death by her parents; her husband, Bill; four sons, Frank Johnson, Billy Ellis, Clifford Ellis, and Earl Adams; two brothers, Bob and Jack; and a sister, Viola. Lois is survived by three sons, Andrew Billings, and his wife, Delores, of Eldridge, Missouri; Richard Adams, and his wife, Allison, of England, and Durle Adams, and his wife, Grace, of the State of California; four grandchildren, Steven, Adam, Erik, and his wife, Karen, Brian, Danny, and Chris; three great-grandchildren; several nieces and nephews; as well as a host of other relatives and friends. She was raised on a farm near Ponca City, Oklahoma and received her education there. She then lived in California for several years, where she worked feeding the homeless, as she loved to help the unfortunate. She also was a devoted homemaker to her husband and family. Lois had attended New Wine Church in California. In her spare time she enjoyed reading, talking about life, and had a passion for storytelling. She loved her family dearly and especially enjoyed her grandchildren and great-grandchildren. Lois was a loving mother, grandmother, great-grandmother, aunt, and was a caring friend. We celebrate her life and know that her family and friends will hold tight to the wonderful memories she made for them during her eighty-one years.

Lois Forresten Adams was born July 17, 1932, in Ponca City, Oklahoma, and departed this life Friday, September 24, 2021, in Mercy Hospital, in Springfield, Missouri at the age of eighty-nine years, two months, and seven days. On May 23, 1959,... View Obituary & Service Information

The family of Lois F. Adams (Lebanon) created this Life Tributes page to make it easy to share your memories.