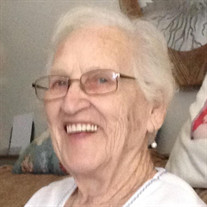 Lois Marie Bass, daughter of Frank and Janie Fisher York, was born December 27, 1924, in Dwight, Kansas. She departed this life Thursday, December 23, 2021, in Marshfield Care Center, in Marshfield, Missouri at the age of ninety-six years, eleven months, and twenty-seven days. On January 14, 1973, she was united in marriage to Paul “Ray” Bass, and they shared thirteen years of happiness and memories before his passing in November of 1986. Ray is buried in the Veteran’s Field of Honor in Wichita, Kansas. She was also preceded in death by her parents; and three brothers, Neil F., Vernon S., and Leonard O. York. Lois is survived by two brothers, Glenn York, and his wife, Joyce, of Lebanon, Missouri, and Irwin E. York, and his wife, Erma, of Columbus, Ohio; a sister, Janie Winfrey, of Lebanon, Missouri; a number of nieces and nephews, great-nieces and great-nephews; as well as a host of other relatives and friends. She was born and raised in the Wichita, Kansas area, where she earned her education. She continued to live most of her life in that area where she was a member of the Civil Air Patrol in Wichita and worked for the NCR Corporation until retiring. In 2000, she came to live in Missouri along with her dog, “Nemo”, and two cats, “Tommy” and “Sammie”. Lois was baptized in 1967. She was a member of the Arkansas Travelers singing band for many years. She loved to sing and give her testimony. She always sang, “God On The Mountain”. She knew where she was going and was proud to be a Christian. In her spare time she enjoyed oil painting, ceramics and gardening. She loved her family dearly and especially enjoyed her nieces and nephews. Lois was a loving sister, aunt, great-aunt, and was a caring neighbor and friend. We celebrate her life and know that her family and friends will cherish the wonderful memories she made for them during her lifetime.

The family of Lois M. Bass (Lebanon) created this Life Tributes page to make it easy to share your memories.