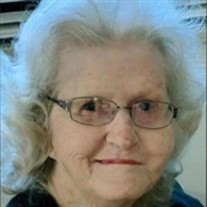 Lois Estele (Stevens) Rodgers, 89 years, passed away on August 8, 2021 at Birch Pointe Health and Rehabilitation in Springfield, MO where she was a resident for almost 3 years. She was the widower of William (Bill) Jerale Rodgers. They shared 60 years of marriage together. Lois was born in Bolivar, Missouri on July 7, 1932 to Sam and Ellen Stevens. She graduated from Bolivar High School. During married life she worked on the farm as a homemaker and cared for her family. She was saved in 1945 at the age of 13 at Calvary Missionary Baptist Church. Years later she became a member of Southside Missionary Baptist Church. She enjoyed sewing clothes for her family, making numerous dolls which earned blue ribbons at the Ozark Empire Fair, and making delicious candy at Christmas time. She will be remembered for taking her children to church so they could seek the Lord and find Him as their Saviour precious to their hearts. She did what was most important. She is preceded in death by her husband, Bill, 3 sisters, Willetta Barger, Naida Davis and Mary Rachael Black, and 2 brothers, Billie Sam Stevens and Arthur Lee Stevens. She is survived by two children, Teresa Anne (Rodgers) Stewart and her husband Steve of Lebanon, MO, Buddy Rodgers of Bolivar, MO; three grandchildren, Stephanie Rachael (Stewart) Hall and her husband Jeff of Springfield, Christopher Steven Stewart of Lebanon, and Hannah Elizabeth Stewart of Springfield, one great-grandson, Steven Russel Hall, and a sister-in-law, Tillie Stevens of Springfield, MO. Memorial donations may be made to Southside Missionary Baptist Church, Bolivar, MO Visitation for Lois will from 5:00 to 7:00 PM, Thursday, August 12, 2021, at Butler Funeral Home. Service will be at 11:00 AM, Friday, August 13, 2021, at Butler Funeral Home. Burial will follow at Greenwood Cemetery, Bolivar, Missouri. To send flowers or a memorial gift to the family of Lois Rodgers please visit our Sympathy Store.

Lois Estele (Stevens) Rodgers, 89 years, passed away on August 8, 2021 at Birch Pointe Health and Rehabilitation in Springfield, MO where she was a resident for almost 3 years. She was the widower of William (Bill) Jerale Rodgers. They shared... View Obituary & Service Information

The family of Lois Rogers (Bolivar) created this Life Tributes page to make it easy to share your memories.