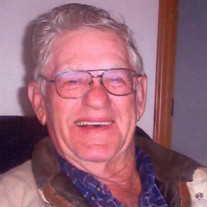 Loraine “Hoover” Clovis Moore, age 90 of Grovespring, Missouri, passed away Monday, January 24, 2022 in Lebanon North Nursing and Rehabilitation. He was born October 7, 1931, in Grovespring, Missouri to Robert “Arch” and Eliza Jane Gourley Moore, who preceded him in death. Hoover was also preceded in death by his wife, Etha “Pauline” Hart Moore; three sons, Mitch, Mike and Jim; four brothers, Herman, Earnie, Wilford and Charles Moore; and four sisters, Roberta Weaver, Thelma Barker, Audrey Johnson and Imogene Lindsey. He is survived by a son, Richard Moore of Lebanon, and loyal partner, Margie Brady of Hartville, Missouri. Hoover spent his life in the Grovespring community and married Etha “Pauline” Hart on September 9, 1961. Pauline passed away April 8, 2014. He began his adult life by working at Rice Stix. Following his time there, he worked in the logging industry and sold wood in the Kansas City area. He had accepted Christ as his Lord and Savior before he passed away. Hoover was a “happy go lucky” kind of guy and didn’t take life too seriously. He enjoyed singing and dancing and in general, was considered to be a “free spirit”. He had a passion for horses and did horse training for many around the Grovespring area. He was known for his ability to interact with the horses and make them cooperate. He loved being in the great outdoors and enjoyed coon hunting. He lived a long, full life and left a strong legacy for his family to remember him by. Funeral services will be Thursday, Jan. 27, 2022 at 2 p.m. at Holman-Howe Funeral Home with Rev. David Douglas officiating. Visitation will be from 1 p.m. - 2 p.m. Thursday. Burial will be in Mt. Zion Cuba Cemetery. A memorial has been established to the cemetery and may be left at the funeral home.

The family of Loraine "Hoover" Moore (Lebanon) created this Life Tributes page to make it easy to share your memories.