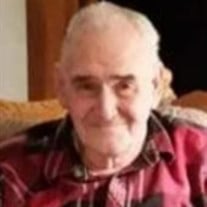 Lorin Trent Cyrus, son of Ed L. and Flossie L Gibson Cyrus was born in Camden County, Camdenton, Missouri on July 11, 1927. And departed this life to be with his Lord and Savior on February 10, 2022 at the Lebanon North Nursing Home in Lebanon, Missouri. At the age of ninety-four years, six months, and thirty days. On August 19, 1956, Lorin was united in marriage to Kathryn Faith Odom of Camdenton, Missouri at the Old Pleasant Hill School House, where he and Kathryn both attended grade school. They then traveled the western states, living some time in California and Alaska, Loren loved to tell of his many travel adventures. Kathryn preceded him in death on October 26, 2013 at Lake Regional Hospital, Osage Beach, Missouri. After her death, he moved to Lebanon, Missouri to live with his sister, Edna Ann Bonacker. Not many people knew but Lorin had lost his eyesight. At an early age Lorin professed his faith in Christ and was a member and a Deacon of Pleasant Hill Missionary Baptist Church, Camdenton, Missouri at the time of his death. Lorin was very proud of his service in the U.S. Army during the Korean War in 1950 to 1953 and in the reserves until 1956. He was honorably discharged as a Cpl. and given medals for his service on the front line. Lorin was employed most of his life in construction, Obrien Lumber Co. and Hopkins Lumber Co. in Camdenton. In his last years he worked at Marathon Electric, Lebanon from which he retired in 1992. He built his own house and work shed/garage on Tunnel Dam Lake, Camdenton, Missouri in the early sixties and he was very proud of that accomplishment. He loved his church, going faithfully until his health failed. He enjoyed his family with much love. His hobbies were fishing, hunting, carving, woodwork, and reading until he lost his eyesight. He loved gospel music, working in his flower gardens in Lebanon and visiting with family and friends. Those surviving are his sister, Edna Ann Bonacker of Lebanon, Missouri; four nieces; Linda Evans of Kansas City, Missouri, Wanda Miscavish, South Carolina, Debbie Nelson and Donna Cook, of Lebanon, Missouri and one nephew, Jerry Rogers of Camdenton. Many other close relatives, cousins, and friends survive and will miss him. He is preceded in death by his parents, his wife Kathryn, his three sisters, Theo Rogers, Dora Mae Knox, and Margaret Pierce; his niece, Anita Pierce and nephews, Michael Pierce, Johnny Rogers and Jimmie Rogers. Graveside services will be held, 2:00 p.m., Tuesday, February 15, 2022 at the Pleasant Hill Cemetery, Camdenton, Missouri per his request. Donations may be made to the Pleasant Hill Missionary Baptist Church or Pleasant Hill Cemetery Fund and mailed to Allee-Holman-Howe Funeral Home, 15 Clint Avenue, Camdenton, Missouri 65020. Online condolences may be left at www.alleeholmanhowe.com Arrangements are under the direction of Allee-Holman-Howe Funeral Home, Camdenton, Missouri. To send flowers to the family or plant a tree in memory of Lorin Trent Cyrus please visit our Tribute Store.

Lorin Trent Cyrus, son of Ed L. and Flossie L Gibson Cyrus was born in Camden County, Camdenton, Missouri on July 11, 1927. And departed this life to be with his Lord and Savior on February 10, 2022 at the Lebanon North Nursing Home in Lebanon,... View Obituary & Service Information

The family of Loren Cyrus (Camdenton) created this Life Tributes page to make it easy to share your memories.