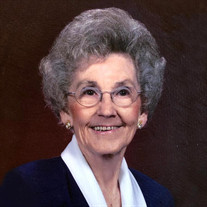 Margaret Louise Peterson, daughter of Raymond Medley, Sr. and Eva Jennings Medley, owners and operators of Medley Pharmacy in Lebanon, was born November 17, 1922, in Lebanon, Missouri. She left this world to join her heavenly Father on Saturday, October 2, 2021, in her daughter’s home in Columbia, Missouri, at the age of ninety-eight years, ten months, and fifteen days. On June 22, 1946, she married Carl W. Peterson and to this union one daughter was born. She was preceded in death by her parents; her husband, Carl, in 2007; two infant sisters; and two sisters-in-law, Joan Medley and Charlotte Medley. Louise is survived by a daughter, Levonne Morgan, and her husband, Lee, of Columbia, Missouri; three grandchildren, Kirk Wendell Morgan, Landon Royce Morgan, and his wife, Malia, and Moriah Lorinda Morgan, and her fiancé, Tharon Lowry; ten great-grandchildren, Kenny, Gabriel, Mary, Eva, Lilly, Aden, Marley, Hannah, Keaton, and Lorinda; a brother, Raymond Medley, Jr., of Lebanon, Missouri; two nieces, Mitzi Farricker, and her husband, Ed, and Lorna Patterson, and her husband, Tim; a number of cousins; as well as a host of other relatives and friends. She was born and raised in Lebanon, and graduated from Lebanon High School in the Class of 1940. In 1942, Louise met a young soldier that was stationed at Fort Leonard Wood, and had been attending Taylor Avenue Church of God, where Louise and her family attended. A love story developed between the two and upon his return from Europe during World War II, in December of 1945, they were soon married. Carl attended Anderson University receiving his degree in theology and became a minister in the Church of God (affiliates in Anderson, Indiana). For over fifty years, Louise faithfully served as a devoted pastor’s wife when Carl ministered in Kennett, Missouri, where their daughter was born, Lebanon, Missouri, and Jefferson City, Missouri. After Carl retired, he and Louise made their home in Lebanon and were active in Highland Park Church of God. Louise was also a devoted homemaker and loving mother throughout the years. Louise loved gospel music and often sang at church with her husband, her father, and other members of the church. She sang in the church choir, taught Sunday school and was active in the Women’s Missionary Group. She also supported the Pregnancy Crisis Center. She liked caring for her home, and enjoyed growing beautiful flowers. She was always well dressed and cared about her appearance. She loved her family dearly and especially enjoyed her grandchildren and great-grandchildren. Louise was a loving mother, grandmother, great-grandmother, sister, aunt, and was caring friend. We celebrate her life and know that her family and friends will cherish the wonderful memories she created for them during her lifetime. Memorials to the Highland Park Church of God and to the Pregnancy Support Center have been established and contributions may be made through the funeral home.

The family of Louise Peterson (Lebanon) created this Life Tributes page to make it easy to share your memories.