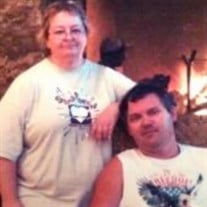 Madonna Lorraine Brady, 52, of Eldon, Missouri, passed away on July 7, 2021 at Lake Regional Hospital in Osage Beach, Missouri. Madonna was born in Kirksville, Missouri on December 4, 1968, to Arthur and Barbara (Harvey) Ward. Michael Lane Brady,51, of Eldon, Missouri, passed away on July 4, 2021 at Lake Regional Hospital in Osage Beach, Missouri. Michael was born in Waynesville, Missouri on November 23, 1969 to Orolee Brady and Linda (West) Scott. Madonna is preceded in death by her husband, Michael Brady; her father, Arthur Wayne Ward; family members, Bernice Ward, Merle Ward, Norman Ward, Irene Carter, Clara Strickler, Grace and Omar Ward, Guy Harvey, Olive Harvey, Violet Nolte, Jerry Harvey and Nick Rettinger. Madonna is survived by her mom, Barbara Ward; siblings, Bryan Ward and wife Angela, Jerry Ward, Rhonda Thomas, David MacIlroy and wife Tracy, Mike Tosspon and wife Brenda. Michael is preceded in passing by his mother, Linda West-Scott; uncle, Junior Brady; step-father, Jim Scott; step-mother, Wanda Brady; and step-sister, Sheila Johns. He is survived by his siblings, Tina Belt, Glen and wife Penny Brady, Shirley and husband Randy Reid, Jim Brady, Danette and husband Tony McClain, Danielle Eakins, Michelle Ramsey, Lisa Hughes Wright and husband Tommy and Paula Springer. Together, Michael and Madonna leave behind several nieces, nephews, friends and family who will all truly miss them. Madonna graduated from Macon R-1 and continued on to receive her LPN license from Indian Hills Community College. After she finished her schooling, she worked as an LPN for nursing homes and hospitals for 20 years. She truly loved being around her family and gardening with Mike; Together they would sell their fresh produce. Michael enjoyed spending time with his family, always had “Good News”, and loved the Lord. He and Madonna treated their dogs, Lindsey, Grace, Toby and Petrie like their kids. For a blind man, he could play pool better than anyone. He loved tinkering on his lawn mowers, even though his best friend and brother Glen would have to repair his repairs. Duct tape fixes everything. Michael and Madonna Brady were united in marriage on October 13, 2012 and they started their life together; the two became one as the best I had ever seen. They depended on one another and served one another. Madonna would become his eyes and Mike would become Madonna’s back. And what used to seem impossible for them to do by themselves, they could now accomplish together. Both had their ailment’s; Mike was legally blind, Madonna had many health issues and struggled to physically get things accomplished. Both of them together moved from one house to the next, managing to improve their homes every time; until they both became homeowners just a few months back. They lived their life as one, they loved as one and you couldn’t see one without the other. After they were together it was no longer Mike or Madonna but now Mike and Madonna. God put two people together to form the perfect union that this world should see as what marriage is all about. Serving one another in love and respect and helping others when it seemed they couldn’t help themselves. God took two people and made them one with a very blessed life and let both of them go to eternity together in death. There will be a hole in everyone’s heart for the love that we had for them. Till we see you again and you can once again, share the “Good News”. To send flowers to the family or plant a tree in memory of Michael & Madonna Brady please visit our Tribute Store.

The family of Madonna L. Brady (Camdenton) created this Life Tributes page to make it easy to share your memories.

Madonna Lorraine Brady, 52, of Eldon, Missouri, passed away on...