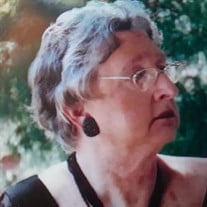 Marcella Alma Smith, daughter of Horace A. and Rosalia Elizabeth Alma Fucher Banks, was born December 21, 1937, in Wanaska, Minnesota. She departed this life Sunday, May 23, 2021, in South Hampton Place, in Columbia, Missouri, at the age of eighty-three years, five months, and two days. On June 5, 1968, she was united in marriage to Oliver Price “Smitty” Smith, and to this union two daughters and two sons were born. She was preceded in death by her parents; her husband, “Smitty”, on April 14, 1992; a daughter, Deana Kay Smith; two brothers, Ray Allen Banks and Earl D. Banks; and a sister, Norma Jean Hickson. Marcella is survived by a daughter, Lucinda Conley, of Independence, Missouri; two sons, Scott Smith, and his wife, Melissa, of Columbia, Missouri, and Price A. Smith, and his wife, Robyn, of Success, Missouri; six grandchildren, Lisa, Eric, Heather, Abigail, Tabitha, and Scott Michael; nine great-grandchildren; three great-great-grandchildren; a brother, Ralph E. Banks, of Omaha, Nebraska; three sisters, Arlene Baker, of Kansas City, Missouri, Lorna Aaronson, of Madison, Wisconsin, and Doris Perry, of Omaha, Nebraska; a number of nieces and nephews; as well as a host of other relatives and friends. She was raised in Minnesota until her family moved to Kansas City, Missouri when she was in junior high school. She continued her education and graduated from Manuel High School in Kansas City. She then worked for the Clipper Man Company for a time before moving to California. She made her home in California for a few years and worked as a telephone operator. She then moved back to Kansas City. After she and Smitty were married, they made their home in the Jerome and Success, Missouri areas. Marcella volunteered as a leader and coordinator with the Mark Twain Council of the Girl Scouts, while attending college at Drury University, studying to be a school teacher. She taught school in Plato, Missouri, and then in Independence, Missouri for ten years. She was the Literacy Coordinator for the Independence School District for several years. She volunteered with the Literacy Foundation of Greater Kansas City for several years. In 2015, she retired and moved to Columbia, Missouri. In her spare time she enjoyed taking road trips, gardening and reading. She loved to play cards, especially Tripoli, which she always won and particularly enjoyed winning at all costs. She loved the city of Kansas City and was a fan of the Kansas City Chiefs Football Team, especially their tight end, Tony Gonzalez. She loved her family dearly and was very fond of having all of her grandchildren around her. Marcella was a loving mother, grandmother, great-grandmother, great-great-grandmother, sister, aunt and was a caring friend. We celebrate her life and know that her family and friends will cherish the wonderful memories she created for them during her lifetime. Graveside services for Mrs. Smith will be Friday, May 28 at 1 p.m. in Old Success Cemetery with Pastor Steve Reeves officiating. Friends may call at their convenience. A memorial has been established to Literacy K.C. and memorials may be left at the funeral home. Arrangements are under the direction of Holman-Howe Funeral Home of Lebanon.

Marcella Alma Smith, daughter of Horace A. and Rosalia Elizabeth Alma Fucher Banks, was born December 21, 1937, in Wanaska, Minnesota. She departed this life Sunday, May 23, 2021, in South Hampton Place, in Columbia, Missouri, at the age of... View Obituary & Service Information

The family of Marcella A. Smith (Lebanon) created this Life Tributes page to make it easy to share your memories.

Marcella Alma Smith, daughter of Horace A. and Rosalia Elizabeth...