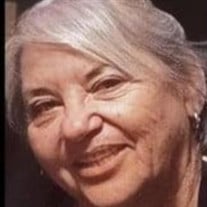 The world lost a beloved wife, mother and grandmother, Marcia Mason on Tuesday, December 7th, 2021. She passed away in her sleep in her bed at home. Marcia Mae Mason (Jones) was born in Red Oak, Iowa on July 13, 1949 to Delmont and Susie Jones. She moved around the country with her brothers and sister until they finally stayed and ended up going to school in Shore Acres, California. It just so happened that they purchased a house across the street from her future husband and father to her children. Some would consider this fate. She graduated from Pacifica High School in 1967. In August 1970, she started dating a navy man fresh off the ship. Dean Mason proposed to Marcia later that year in December. They had their wedding on January 16th, 1971. Not even a year later their first child, Desiree Renee, was born. In July of 1973, Dean and Marcia made the decision to move to Missouri. Marcia wanted to be near her parents, who had moved there the year before. Dean agreed with the decision to move because it would be much cheaper for them to live there than to pay the outrageous phone bill every month from California to Missouri. Dean and Marcia bought a small parcel of land in 1975. This had become their forever home. A couple of years later on November 26th, 1978, they had their second child, Shane Allen. Marcia had worked several jobs over the years in the small area of Buffalo, Missouri. Her most beloved job title that she ever had was the title of “Grandmother”. The path of being a grandmother started with her oldest grandchild, Patience Annabelle in 2008, followed by Dean Allen RK in 2012. The most recent grandchild of hers was Sebastion Allen in 2019. Marcia was also a godmother to Trey Cruse. This was how the title of “Marna” was born. Her beloved godson couldn’t pronounce Aunt Marcia; he could only pronounce Aunt Marna. Marcia’s life revolved around her children, grandchildren and family. She was the caretaker and matriarch of them all. She was preceded in death by her father, Delmont Jones, mother, Susie Jones; and brother, Anthony Jones. Her spirit lives on with her husband, Dean Mason; daughter, Desiree Mason; son, Shane Mason; sister, Shonnette Bischoff; brothers, Riley and Shannon Jones; grandchildren, Patience, Dean, and Sebastian Mason; and many nieces and nephews. The memorial visitation for Marcia will be from 6:00 p.m. to 7:00 p.m. on Saturday, December 11, 2021 at Cantlon-Otterness & Viets Funeral Home in Buffalo, Missouri. To send flowers or a memorial gift to the family of Marcia Mae Mason please visit our Sympathy Store.

The world lost a beloved wife, mother and grandmother, Marcia Mason on Tuesday, December 7th, 2021. She passed away in her sleep in her bed at home. Marcia Mae Mason (Jones) was born in Red Oak, Iowa on July 13, 1949 to Delmont and Susie Jones.... View Obituary & Service Information

The family of Marcia Mae Mason (Buffalo) created this Life Tributes page to make it easy to share your memories.

The world lost a beloved wife, mother and grandmother, Marcia...