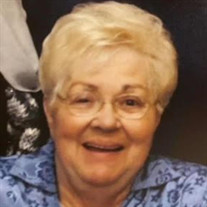 Maria “Mia” Josepha Martina Adams, daughter of Robertus and Gerarda van der Heijde Duffhuis, was born January 27, 1943, in Eindhoven, The Netherlands. She departed this life Wednesday, December 29, 2021, in her home, near Phillipsburg, Missouri, at the age of seventy-eight years, eleven months, and two days. On November 30, 1960, she was united in marriage to Donald Alexander Adams, and to this union two daughters were born. She was preceded in death by her parents; a son-in-law, David Johnson; and three brothers, Adrianus, Jan, and an infant. Mia is survived by her loving husband of sixty-one years, Don, of the home; two daughters, Tina Hyde, and her husband, Jeff, of Phillipsburg, Missouri, and Grace Johnson, of Springfield, Missouri; two grandchildren, Amanda Johnson, of Springfield, Missouri, and Devon Johnson, of Laverne, Tennessee; a great-grandson, Jamison Lawlor; a brother, Robert Duffhuis, of The Netherlands; a sister, Willamein Aerts-Duffhuis, of The Netherlands; several nieces and nephews; as well as a host of other relatives and friends. She was born and raised in The Netherlands and earned her education there. She met her husband, Don, when he was stationed in Germany while serving in the military. She and Don left for the United States in 1961. They made their home in the Kansas City, Missouri area for many years, and Mia became an American citizen in 1969. She was always a devoted homemaker to her husband and family. While Don was working for Trans World Airlines the family made their home in Saudi Arabia for eight years, where Mia became a hair stylist and owned her own salon for several years. They had recently made their home in the Phillipsburg community to be closer to family. Mia was raised in the Catholic faith. She had worked with the Girl Scouts and Community Theater when she was working as a hair stylist. She was full of life and enjoyed reading, shopping, eating out, knitting, crocheting, and sewing. She was a very friendly person who never met a stranger. Mia was a loving wife, mother, grandmother, great-grandmother, sister, aunt and was a caring friend. We celebrate her life and know that her family and friends will cherish the wonderful memories she created for them during her lifetime. Services For Maria “Mia” Josepha Martina Adams will be held at 2:00 P.M., Tuesday, January 4, 2021 at the Holman-Howe Funeral Home in Lebanon, Missouri. Under the direction of the Holman-Howe Funeral Home of Lebanon, Missouri. With Rev. Greg Turner officiating. Burial will be in the Mt. Zion Cemetery near Phillipsburg, Missouri. Visitation will be held from 1:00 P.M. – 2:00 P.M., Tuesday, January 4, 2021 at the Holman-Howe Funeral Home in Lebanon, Missouri. A memorial to the St. Jude Children’s Research Hospital has been established and contributions may be made through the funeral home.