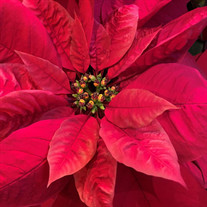 Marjorie Ann Malone, daughter of Robert and Grace Lane Wood, was born October 9, 1924, in Peru, Illinois. She departed this life Friday, December 3, 2021, in her home, in Union, Missouri, at the age of ninety-seven years, one month, and twenty-five days. Early in her life she was united in marriage to Ross W. Malone, and to this union three sons were born. She was preceded in death by her parents; her husband, Ross, on October 4, 1964; two sons, Lanie and David; four sisters, Eilene, Dorothy, Geri, and Shirley. Marjorie is survived by a son, Ross Malone, Jr., of Union, Missouri; two grandchildren; two great-grandchildren; several nieces and nephews; as well as a host of other relatives and friends. She was born and raised in Peru, Illinois, and graduated from Peru High School. During World War II, Marjorie and Ross were married and Marjorie worked for Bell Telephone in Illinois for several years. After th war ended, the family moved to Lebanon, Missouri and made their home. Marjorie was a devoted homemaker to her husband and family and also worked for Bell Telephone in Lebanon for a few years. She then worked for First National Bank which later became Boatman’s Bank. Marjorie and Ross were very active in the first Congregational Church of Lebanon. She moved to Kirkwood, Missouri and then to Springfield, where she worked for American National Bank. She eventually retired and enjoyed her retirement years. Three years ago, she moved to Union, to live with her son, Ross and daughter-in-law Doris Malone. When she was younger, she enjoyed traveling and always kept her family at the center of her life. She especially loved her grandchildren and great-grandchildren. Marjorie was a loving mother, grandmother, great-grandmother, aunt, and was a caring friend. She will be remembered as an excellent genealogist and internet researcher. We celebrate her life and know that her family and friends will hold tight to the wonderful memories she created for them during her ninety-seven years. Services are private and are under the direction of Holman-Howe Funeral Home of Lebanon, Missouri.

Marjorie Ann Malone, daughter of Robert and Grace Lane Wood, was born October 9, 1924, in Peru, Illinois. She departed this life Friday, December 3, 2021, in her home, in Union, Missouri, at the age of ninety-seven years, one month, and twenty-five... View Obituary & Service Information

The family of Marjorie Ann Malone (Lebanon) created this Life Tributes page to make it easy to share your memories.