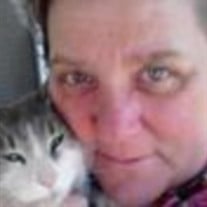 Marsha Elaine Crisp left to be with Jesus on July 30, 2021 at 4:54 A.M. at Ozarks Medical Center in West Plains, Missouri from complications from COVID-19. She was 60 years old and was a loving daughter, wife, mother, grandmother, great-grandmother, aunt and friend. Marsha was born January 6, 1961 to Harry and Barbara (Guinn) Landers, at Ball Memorial Hospital in Muncie, Indiana. She lived in Indiana until about the age of 13, she then moved with her family to Hartville, Missouri, where she has resided ever since. She married her husband Johnny Crisp on June 23, 1990. She was very well known in the community, and very much loved by everyone that ever met her. She loved to bake and would bake her famous cinnamon rolls and carrot cake then she would sell them door to door. She was known as the “sweets lady” to many children in the community and was also given the nickname Aunt Bea. She worked at Casey’s for 11 years and she also worked for Town and Country Supermarket for several years; she met many people through her work. Marsha loved music, she played guitar from the age of eight, she also played piano, the accordion, as well as many other instruments. She was incredibly talented in music and could pretty well play any instrument she picked up. Marsha also had a love for cats and was known as the cat lady by her family and she dearly loved her cat Jasmine and her two grand dogs Buster and Casper. Marsha was preceded in death by her parents and two sisters, Roxanna Youngblood and Shelia Swindler. She leaves behind her husband Johnny Dean Crisp of Hartville, Missouri, her children; Jeanna Crisp of Hartville, Missouri, Sheila McCarty and her husband Scott of West Plains, Missouri and Kirby Crisp of Webb City, Missouri, two grandchildren, Cody Kenaga and his wife Sierra of Pendleton, Oregon and Bethany Galler of Conway, Missouri, great-grandchildren, Harper and Sage Kenaga of Pendleton, Oregon, a brother, Jeffrey Landers and his wife Judy of Hartville, Missouri, a sister, Sherry Hall and her husband Albert of Springfield, Missouri, two grand dogs, Buster and Casper, her cat, Jasmine, nieces, nephews, cousins, loved ones and friends. She will be greatly missed by all who knew her, but we find comfort in knowing that she is with her savior Jesus Christ and her loved ones for eternity.

Marsha Elaine Crisp left to be with Jesus on July 30, 2021 at 4:54 A.M. at Ozarks Medical Center in West Plains, Missouri from complications from COVID-19. She was 60 years old and was a loving daughter, wife, mother, grandmother, great-grandmother,... View Obituary & Service Information

The family of Marsha Crisp (Hartville) created this Life Tributes page to make it easy to share your memories.