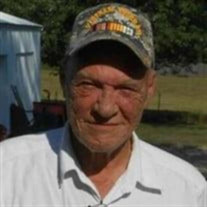 Marvin “Lon” Lonzo Graves, 78 of Morrisville, Missouri, passed away at his residence on Wednesday, September 8, 2021. He is preceded in death by his father and mother Marvin and Glenda Graves and a grandson Zachary Lytle. He is survived by his wife Paula of Morrisville, Missouri, his sister Sandra Johnson of Beaverton, Oregon, 2 daughters Lisa Graves and Sheree Graves of Nixa, Missouri, 4 stepdaughters, Amy (Des) Hoorn, Sarah (Tim) Choate, Megan (Jason) Morrison and Buffy (Jason) Starkey. Also surviving are his 4 grandchildren, Christopher, Trinity, Ryan and Portia, along with his 7 great grandchildren and his 7 step grandchildren: Dawson, Carson, Ezekiel, Rowan, Alina, Finley and Haskell. Lon was an Air Force veteran who loved his country and proudly served in Vietnam. He retired as Federal Officer with the Bureau of Prisons. He also served as a councilman for the City of Morrisville after his retirement. Lon was also a member of the Masonic Lodge #195 of Bolivar. His real passion other than hunting with his beagles, fishing, restoring old cars and working in his wood shop was music. He played the guitar and sang starting at a young age. In high school he had a band named “Lonnie Graves and the Rebels”, he then went on to join the “Countdowns” in which he opened at Gas Light Square in St. Louis for Ike and Tina Turner along with numerous other stars. He then was apart of “Lonzo and the Magic Rubber Band”, touring in several states. After his retirement, he played with “2 Wheel Dolly”, writing and recording music in his home studio. He loved to listen to Cardinal baseball on his deck at home and have his cocktails. Lon was a true conservative and kept up on all of the news and world happenings until the last final week of his life. Services for Marvin "Lon" will be held 10:00 AM on Tuesday, September 14, 2021 at the Missouri Veterans Cemetery located at 5201 South Southwood Road in Springfield, Missouri. A visitation will be held on Monday, September 13, 2021 from 5 to 7 PM at Butler Funeral Home in Bolivar, Missouri. In lieu of flowers, memorial contributions may be made in his honor to St. Jude’s Children’s Research Hospital or Seasons Hospice, who took excellent care of him. To send flowers or a memorial gift to the family of Marvin Graves please visit our Sympathy Store.

Marvin &#8220;Lon&#8221; Lonzo Graves, 78 of Morrisville, Missouri, passed away at his residence on Wednesday, September 8, 2021. He is preceded in death by his father and mother Marvin and Glenda Graves and a grandson Zachary Lytle. He is... View Obituary & Service Information

The family of Marvin Graves (Bolivar) created this Life Tributes page to make it easy to share your memories.