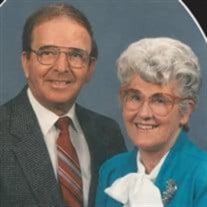 Mary Louise (Vanaudestrade) Blick was born on August 5, 1927 at her grandfather’s farm in the small town of Irwin, PA to Gideon and Germaine Vanaudestrade. Her parents also had another daughter, Emily. Mary Louise grew up around Pittsburgh, PA where she graduated from Penn High School and Robert Moore’s Business College. She met Nelson Blick in 1945 right after he was discharged from the Army. They were later married in June of 1948. Mary and Nelson had three children, Rick, Randy, and Robyn. After Nelson’s passing in February of 1997, Mary moved to Missouri to live with her daughter Robyn and her family. She also made several trips to Phoenix, AZ to visit her sons, Rick and Randy. Mary attended Wellspring Baptist Fellowship in Bolivar, MO for several years and later attended First Baptist Church with her daughter, Robyn. Mary is survived by her three children, Rick, Randy, and Robyn; her grandchildren, Erica, Jessica, Michael, Zachary, Isaiah, Hannah, Yoseph, Noah, Tikvah, Abigail, Yonaton, Shayl, Judah, Mishah, and Ammi; and her great-grandchildren, Dominic, Elizabeth, Nathan, Brook, Ben, Nick, Jacob, Ezra, Moses, Elijah, Rosie, Blakley, Natalie, Mack and Oliver. She also leaves other family members and many friends who will all truly miss her. Cremation rites were accorded under the care and direction of the Cantlon-Otterness & Viets Funeral Home of Buffalo. To send flowers or a memorial gift to the family of Mary Louise Blick please visit our Sympathy Store.

Mary Louise (Vanaudestrade) Blick was born on August 5, 1927 at her grandfather&#8217;s farm in the small town of Irwin, PA to Gideon and Germaine Vanaudestrade. Her parents also had another daughter, Emily. Mary Louise grew up around Pittsburgh,... View Obituary & Service Information

The family of Mary L Blick (Buffalo) created this Life Tributes page to make it easy to share your memories.